Just like outstanding baseball players are recognized through the Esurance Call-Up Worthy program, we want deserving students in the Big Brothers Big Sisters family to receive their own 'call-up.' Through the Esurance Rising Star Students program, they have the opportunity to achieve their dreams with a college stipend from Esurance and Minor League Baseball. 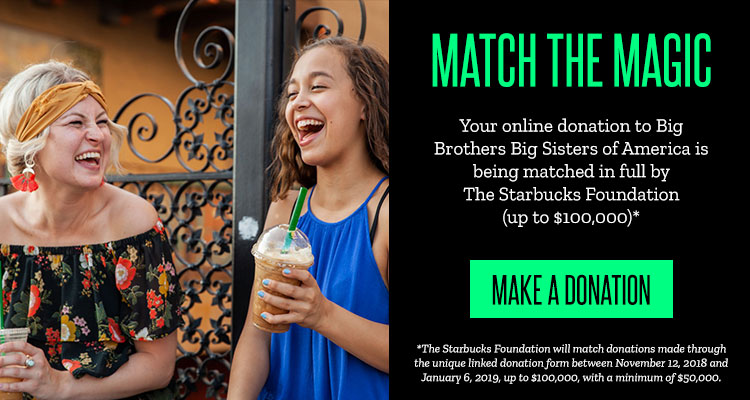 Ambar was never sure college was possible for her. Inspired by seeing the care her aunt’s premature newborn received in the NICU, she dreamed of becoming a doctor and helping preemies. But she worried that her family finances would mean college and medical school were beyond her reach. Having a Big Sister has shown Ambar that she can dream big. She says Big Brothers Big Sisters has influenced her to go to college "no matter how hard or difficult it gets."

When Alexander starts college in the fall, he plans to major in mechanical engineering. After becoming an engineer, he hopes to start his own company and help create more jobs in the construction and mechanical engineering field in Alabama. Wanting to help others find jobs fits into his life philosophy of prioritizing giving back. “The saying is true – ‘if you are not helping someone, you are hurting them,’” he says. Alexander’s Big Brother has helped solidify that philosophy for him. “Zach has always demonstrated the power of giving back, which will definitely be a major part of my future,” Alexander says. “I plan to become a Big and treat my future Little the same way I was treated.”

Stephanie has big goals for her future. She plans to study biochemistry in college, continue her education to earn her doctorate, and become a medical researcher. She says her Big Sister, Leticia, has helped her with her decision-making process for college and with finding balance in her life. Stephanie says her Big Sister has taught her “the importance of prioritizing my responsibilities and commitments with volunteering, school, and my family.” Once Stephanie’s schooling is out of the way, she has another big goal: “I would like to become a volunteer with Big Brothers Big Sisters so that I can guide my ‘Little’ in the same way my Big Sister Leticia did for me.”

Addam spends much of his time helping his family while still balancing getting good grades and studying. He aspires to become a computer programmer and, one day, own his own company. He hopes to use that company as a platform for doing good in the world. Addam says his Big Brother, Paul, has had a big impact on him and his future. “My future will be different due to the fact that I had a male role model in my life to show me right from wrong, good from bad, to laugh with in the good parts of life, and to talk to in the bad parts,” he says.

Austin plans to study animal science in college and become a zookeeper. He has been working hard and racking up college credits while still in high school, and he is focused on his dream of making a career of caring for animals. Growing up, his mom taught him by example how to work hard and take care of a family. His Big Brother became the male role model he didn’t have in a father. “Larry gave me a man I could relate to and learn from,” Austin says. “Larry showed me a whole different world than what I knew.”

Hannah’s dream is to study exercise science and become a sports trainer. “I love the idea of keeping people’s bodies healthy,” she says. Hannah has been matched with Big Sister Sarah for more than six years, and she says her Big Sister inspires her to be dedicated and persistent. After they were matched, Sarah decided to go back to school to become an elementary school teacher. “She never let anything stop her, even when exams had her stressing and staying us late multiple days in a row,” Hannah says. “This has taught me that no matter how tough my life gets, I must complete my goal.”

Mattie Mae is determined to reach her goal of working with animals as a career. She plans to study agriculture or farm and ranch management in college. She has already proved herself a driven, hardworking high school student. All through school, she struggled with ADD and dyslexia, but she has persisted and found ways to succeed in school that work for her and help her deal with these challenges. As a Big Sister to Little Brother Kaden, she has “Although it is my job to teach and be there for Kaden, it goes both ways,” she says. “I am learning responsibility and how to communicate with others, even when they are younger than me.”

Arrielle has a positive attitude about life and a bright outlook on her future. She says becoming a Big Sister helped her gain that perspective. “I went from being an impatient, semi-unorganized individual that only worried about me and what my future holds,” she says. “Now I feel more level-headed knowing that there is this tiny human who looks up to me and sees me as a role model.” Arrielle is determined to graduate high school with a 4.0 GPA and study education in college. She aspires to be a curriculum director so she can help children learn more effectively.

Nate aspires to play Division I football and major in sports business. A high school football player, he hopes to continue to weave football into his life by pursuing a career as a sports agent or a football coach. Balancing school and football has been challenging, but Nate has managed to keep his grades up and make the honor roll. He says his Big Brother Jay has been a key figure in his life and that his impact has been tremendous. “Jay has given me many life lessons,” Nate says. “But most importantly he has taught me how to be a man.”

Becoming a Big Sister helped Natasha realize what she wants to study in college and what career she wants to pursue. Until she was matched with Little Sister Taylor, she often gave in to negative feelings and had a bad attitude about school. When she met Taylor, who has cerebral palsy, she was inspired by Taylor’s positivity. “Taylor pushes me to be a better and brighter person every day of my life,” she says. “I want to make the world a better place because of her.” Even when Taylor is having a hard time, Natasha says, she is always smiling and optimistic. Because of her experience with Taylor, Natasha aspires to become a pediatric nurse and, someday, a pediatrician.

Zachariah plans to study biology in college and hopes to become a pediatrician. As the co-president of the high school choir and a member of numerous student leadership groups, Zachariah has had a lot of practice managing his time in high school. He has also had a great role model in Big Brother Ron. “Ron has shown me that I can have whatever job I want and manage to be invested in spending time with the people I love,” Zachariah says. Big Brother Ron has also helped Zachariah gain confidence and learn to communicate effectively. “There have been many times where I was not happy about a situation, but instead of voicing my displeasure, I went along with it,” he says. “Although there are times in life where ‘going with it’ may be the best choice, Ron has taught me to believe in myself and speak up for what I think is important.”

Growing up, Sam struggled with school. He has found some ways to deal with the difficulties that used to set him back, and he is determined to finish high school strong. He says his Big Brother has been there to encourage him throughout his adolescence. “Most important, he has helped me not be so hard on myself and to have patience with myself and to know that even if I’m not perfect, I can be great and useful and make a difference of my own in the world,” Sam says. In college, Sam plans to study psychology and hopes to find a career working with animals. He is looking forward to finding his place and being independent.

Hearing stories from her parents and family about the illnesses that often afflict the children of Somalia, where her parents are from, has inspired Asma to become a pediatrician. She feels confident she can achieve this goal, partly because of the influence of her Big Sister, Gayl. “Gayl is a role model and motivator who has allowed me to see the success that a woman can achieve,” Asma says. Gayl also helped Asma deal with the bullying of her peers who targeted her in elementary school and made fun of her ethnicity and culture. “I was afraid to discover who I was due to the bullying,” she says. “My Big Sister, Gayl, provided a safe space to embrace who I am.” In high school, Asma has been involved in helping other kids overcome similar obstacles, even becoming a Big while she was still a Little.

Serenia is a girl with a wide variety of interests and a lot of big dreams. When she graduates high school, she plans to go to her dream college and eventually on to medical school. She wants to be a writer and comic book artist, a neuroscientist, a model, and a painter with work featured in the Metropolitan Museum of Art. Her future is bright now, but Serenia says she used see it as bleak because her dad was out of her life and her childhood was hard. Her Big Sister taught her to look at life more positively. “She brought the shyness out of me and turned me into an energetic girl, who, once she starts talking, can’t stop,” she says. “And I love her for that and for showing me that it’s okay to be me.”

Help Mentor the Next Rising Star