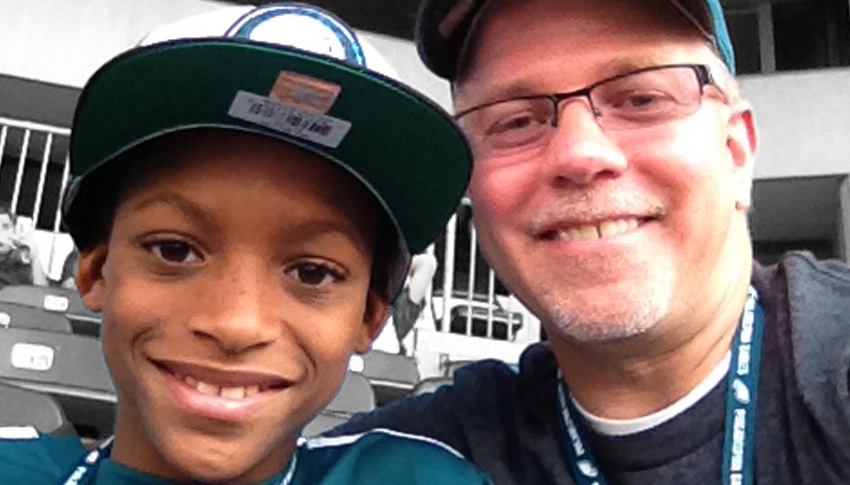 Two years before Little Brother Zyshonne was born, his brother died. Though Zyshonne never met him, he still mourned and agonized over the loss once he was able to comprehend what happened.

“One day, at the playground, I actually caught him crying about his brother’s death,” Zyshonne’s grandfather says. “He told me, ‘It hurts so bad to have a brother die before I had a chance to try to help him.’”

Zyshonne has eight siblings, but he lives with only two of them and his grandparents. His other six brothers and sisters were separated and placed in foster homes. When he was 7, he watched child protective services take away two of them.

The loss of his brother and the displacement of his family led Zyshonne to build a wall of shyness to keep people from getting close to him. His grades and social skills suffered. So, when Zyshonne was 10, his grandfather turned to Big Brothers Big Sisters.

“As the weeks went by, I saw Zyshonne every week for lunch, slowly building our friendship, one game, one laugh, and one smile at a time.”

Around this time, Big Brothers Big Sisters of Cumberland and Salem Counties hosted their annual Rise and Shine Breakfast, an event to raise money and cultivate interest in volunteering. In the crowd sat a man named Wayne, who says that day changed him forever.

“The heartfelt stories I heard that morning moved me to stop sitting on the sidelines,” he says. “I wanted to make a difference, so I took action and volunteered to be a Big Brother.”

The following February, Wayne became the Big Brother to Zyshonne. They began as a school-based match, slowly getting to know each other over games of checkers.

“As the weeks went by, I saw Zyshonne every week for lunch, slowly building our friendship, one game, one laugh, and one smile at a time,” Wayne says.

Their match was still blossoming when the school year ended, and the two wanted it to continue to grow. They transitioned into the community-based program. Their days of playing games of checkers turned into days of attending Phillies and Eagles games, both firsts for Zyshonne. The two formed unforgettable memories, and Zyshonne’s shyness wall began to crumble.

Now, Zyshonne is an outstanding and outspoken young man. His grandfather has noticed improvement in Zyshonne’s confidence and academics. He says “slowly helped him climb out of his cocoon.”

Zyshonne has come a long way from being the boy who didn’t want to get close with anyone. He looks up to his Big Brother and plans to follow in his footsteps.

“I live in a town where kids get in trouble all the time,” Zyshonne says. “I want to show them they can be good because somebody loves them – that is why I decided to become a High School Big. I want to be good for them because I have the power to make them smile and be happy like Wayne did for me when I was growing up.”

Wayne and Zyshonne see how powerful mentoring can be, and they recognize that their story is emblematic. Now, they often speak at Big Brothers Big Sisters events, such as the Rise and Shine Breakfast that first inspired Wayne. They share their story in hopes of inspiring someone in the crowd to become a Big.