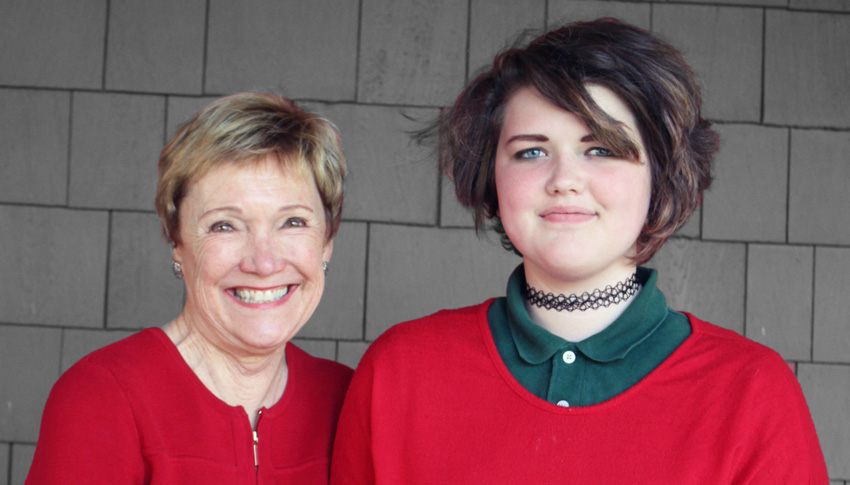 Hidden beneath Sophie’s shy demeanor was an artist who just needed help being brought to the surface. Sophie’s Big Sister, Lynne, helped her chip away her shyness and find her self-confidence.

When Big Sister Lynne and Little Sister Sophie were first matched through Big Brothers Big Sisters, they met in the school library for an hour each week. Lynne tried talking to Sophie about music, family, friends, school, hobbies, food, and movies, but Sophie would only give short, polite responses. It wasn’t until they started talking about books that Sophie became animated. She recommended books to Lynne, and Sophie was impressed by how seriously her Big Sister took the recommendations.

“I remember being surprised whenever she’d come back the next week having actually read them and even took notes on things to talk about with me,” Sophie says. “I loved talking about them and the genuine interest she showed towards them was very important to me.”

“I got the greatest Little Sister, and I get the privilege of watching her grow into an amazing young woman.”

Exploring literature in the library allowed Big Sister Lynne and Little Sister Sophie to build trust. Eventually, they wanted to be able to do activities outside the school, so they transitioned to being a community-based match and continued to build on their strong foundation. Lynne was excited to explore new things with Sophie, but she found that Sophie didn’t enjoy shopping, outdoor activities, or swimming, all things Lynne loved. Lynne admits that they weren’t “a match made in heaven,” but says there was something special about her Little Sister.

“There was something deep in Sophie that I respected and was drawn to: her strength, her maturity, and surprisingly enough because she was so shy, her very clear sense of herself,” Lynne says. “I was mesmerized.”

As the two continued to explore possible interests for Sophie, Lynne discovered that Sophie had a talent for art. They began attending an eclectic local art center with galleries and art classes. They became weekly visitors, where Sophie had private lessons with student interns. Whether using pencil, crayon, clay, acrylic, water color, block printing, Sophie had a knack for art. The Director of Education at the center awarded her the title “Student Fellow” to recognize her love for and dedication to art.

“She painted a ghost ship from ‘Pirates of the Caribbean’ as her student project, and it was hung in the gallery along with her ‘Student Fellow’ award,” Lynne says. “I was so proud of her.”

The artist was surfacing in Sophie, and Lynne wanted to help Sophie continue uncovering her talent and striving to reach her potential. When Sophie began preparing for high school, Lynne looked into a private school with a great art program. The tuition was steep, so Lynne worked with the school, Sophie’s guardians, and Big Brothers Big Sisters to help bring the tuition down significantly, and she created fundraisers to enable the community around Sophie to help her cover the tuition. Everyone in Sophie’s life pulled together to make her dream a reality.

“This school has allowed me to meet some truly amazing people,” Sophie says. “Not only has she helped me immensely these past couple of years, she’s proven to be an amazing friend.”

The once-shy Sophie has changed so much since she first met Big Sister Lynne. She now creates costumes and works on the sets of her school productions, including Cirque de Soleil and The Wizard of Oz. She creates beautiful things, but the best work of all may be who she’s becoming, in part thanks to her Big Sister.