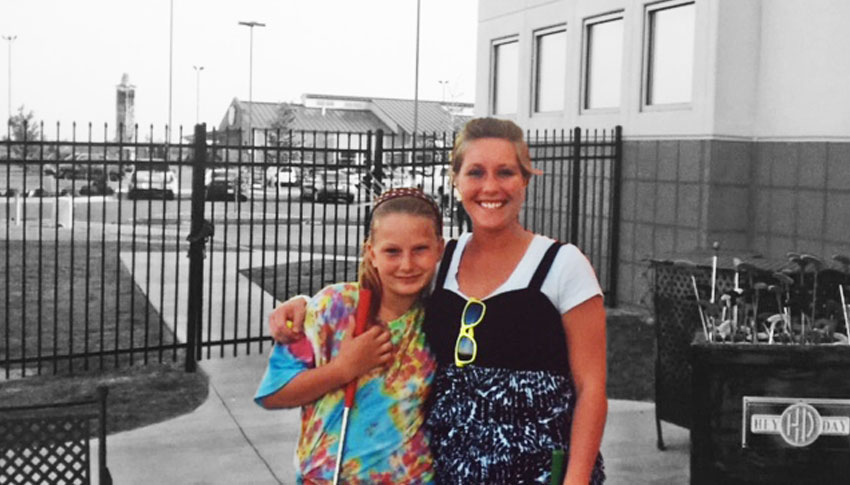 Jacquelyn knew the strain that having an incarcerated parent could have on a child, as her father had been incarnated most of her life. When she heard about Big Brothers Big Sisters’ Amachi program, which pairs mentors with children who have incarcerated parents, she signed up to be a Big Sister to help a child in a similar situation.

“I [signed up] in hopes to help and be a role model to a kid who might need that in their life,” Jacquelyn says. “To just be an extra support.”

She was matched with 12-year-old Alicia, who had been experiencing a lot of transitions in her life due to death and incarceration affecting her family. When they were first matched, Little Sister Alicia and her two younger brothers were splitting time between living with their grandmother and step-grandmother. Alicia carried a lot of emotional weight and her family expected a lot out of her.

“I wanted the match to be fun and exciting, a way for her to escape these responsibilities for an hour or so,” Jacquelyn says.

What they did with that hour didn’t always come easy for them. In the beginning, they had a hard time choosing what to do, so they tried everything they could imagine. Rock climbing, mini-golfing, ice skating, horseback riding. Nothing was off limits.

As time went on, instability returned to Alicia’s home life and the continuation of her match with Jacquelyn became uncertain.

“She moved several times and I had no idea where she was or how to get a hold of her,” Jacquelyn says. “I didn’t know if she wanted to continue it.”

Through those turbulent times, their Match Support Specialist worked hard to keep everyone updated and connect Alicia and Jacquelyn over the phone. After a couple months, things smoothed out at home for Alicia and the match continued with an even stronger bond.

“When we hung out during these times she kept my mind off of it,” Alicia says. “She would ask me if I wanted to talk about the things going wrong. Sometimes we did and others we did not because I didn’t feel up to it, but she was always there.”

Overcoming the moments of uncertainty brought the two even closer. Now, Alicia is set to graduate high school and credits Jacquelyn with helping her get there.

“I more than likely would have ended up in a troubled life, but she kept on being there for me and helping me find myself throughout our years together,” Alicia says. “Jacquelyn will always be that person who gave me my confidence, taught me how to have fun, and was the best sister anyone could ask for.”