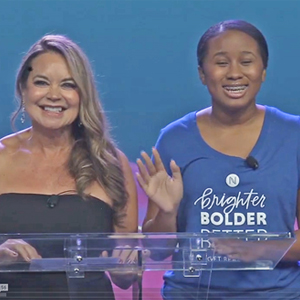 When the pandemic hit, 16-year-old Ryan said she learned a powerful lesson about herself, not letting the unknown overwhelm her. “I was the biggest scaredy cat, but I learned from my Big Sister Renee, not to let fear be your main emotion. My biggest fear was losing her, but we stayed in touch all during quarantine. I love the bond that we have.”  That bond started when Ryan was 9 years old; she met her Big Sister Renee through Big Brothers Big Sisters Lone Star in the Dallas office. And when it comes to sharing what mentoring means to her, Ryan has no fear taking center stage to encourage others to get involved.

In fact, Ryan joined her Big Sister Renee for Neora’s Ripple Foundation event last year.  The company known for age fighting products has partnered with Big Brothers Big Sisters since 2012 to help raise the funds needed to recruit more volunteers and support existing mentoring relationships. This year Neora Brand partners raised more than $220,000; that brings the total raised over the past eight years, $5.7M. Renee, who is the Chief Leadership Officer, says Neora believes in ‘Making People Better’. And volunteering has the same affect. “It’s an amazing relationship! Ryan teaches me tech stuff, and how to use Instagram! So it goes both ways in every area. I’m so thankful I volunteered.”