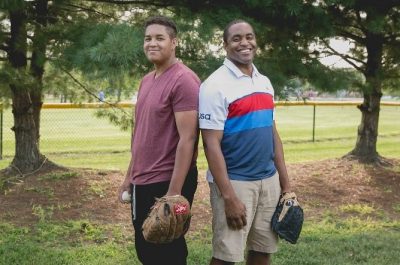 By the age of 10, Little Brother Jaylin endured more pain than any person should have to deal with, coping with the loss of his mother, father and stepfather. Surrounded by the love of his grandmother and three aunts who raised him, they felt the missing piece for Jaylin was having a strong, positive male role model in his life. Big Brother Matt Barnes remembers when he first met Jaylin, the entire family, was there, too. They wanted Matt to know, just how important Jaylin was in their lives.

For Matt, it was an opportunity to give back in a different way. But it’s grown into more than just a volunteer experience, they are truly connected for life. Matt was in the stands watching proudly when Jaylin hit a grand slam; and he’s also been there for Jaylin during the tough times.

Over the past four years, Jaylin and Matt have worked together on goal setting and they’ve had plenty of fun along the way: they compete to win against one another in every sport, whether it’s mini-golf or bowling! Jaylin graduated this year and has an interest in automotive technology.&nbsp; The future entrepreneur wants to open his own automotive shop, focusing on electric cars.

“I had it hard growing up, but I never used that as a crutch, and found ways to better myself,” said Jaylin. “And Matt has helped me grow as a man, which isn’t easy, especially in the society we live in now. He’s taught me how to speak up, and I thank him for that.”