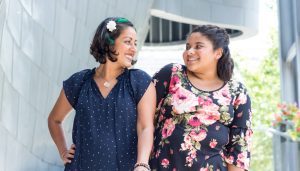 When Little Sister Saleen was 6 years old, she lost her father. At school, her teacher knew she wasn’t coping well with the loss, so they referred her to Big Brothers Big Sisters. She was matched with Myra, who became her Big Sister and began visiting her at school once a week. The two connected instantly, but their match hasn’t been without obstacles. Early on, Myra noticed patches of Saleen’s thick brown hair were missing, and discovered she was pulling out her hair to cope with the loss of her father. With the guidance of her Match Support Specialist, Myra decided to bring supplies to Saleen’s school and help her make a memory book about her father, so they could talk about the happy, positive memories she had of her dad. In June, when Myra was recognized as the National Big Sister of the Year, Saleen stood confidently next to her as she accepted the award and received a standing ovation from the crowd.