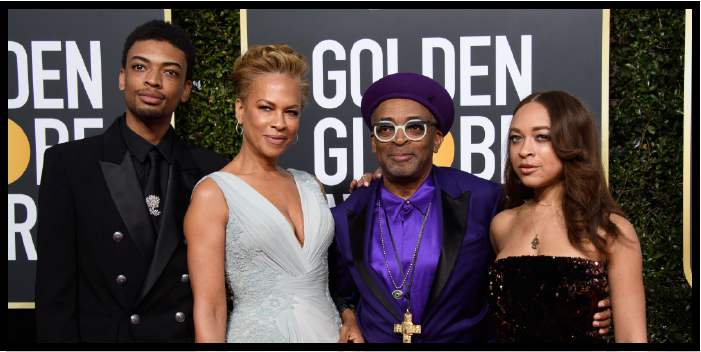 Los Angeles, (January 12, 2021) – Big Brothers Big Sisters of America receives national recognition as part of the Hollywood Foreign Press Association’s (HFPA) unveiling of the Golden Globe Ambassadors. Representing Hollywood’s next generation, ambassadors assist with duties during the Golden Globe Awards ceremony and work to raise awareness around a philanthropic cause of their choosing.

Jackson and Satchel Lee, children of legendary filmmaker and three-time Golden Globe nominee Spike Lee and his wife, producer, and philanthropist Tonya Lewis Lee, were named as the 2021 Golden Globe® Ambassadors. Their appointment marks the first time in HFPA history that two siblings of color have held the position, with Jackson being the first Black male Ambassador.

The Lees thanked their parents for inspiring them to use their own voices, pursue their passions, and the importance of also using this platform to raise awareness of social issues. The siblings will be working with two different charities throughout their ambassadorship. Satchel selected Callen-Lorde, which provides quality healthcare and related services to the LGBTQIA+ communities in New York. Jackson chose Big Brothers Big Sisters of America, which creates and supports one-to-one mentoring relationships that ignite the power and promise of youth. Both organizations will receive a $25,000 grant from the HFPA, totaling $50,000 made on the Lees’ behalf.

“Having my dad as a mentor inspired me to choose Big Brothers Big Sisters, a charity built upon the foundation that forming positive, intergenerational relationships can have a profound impact on young lives,” said Jackson Lee, who recently stepped into the big shoes of his father, a long-time collaborator of the Nike Air Jordan brand, to design a pair of his own. “As a visionary creative, my dad taught Satchel and me the importance of entertainment as a cultural catalyst of change.”

“We know now, more than ever, that positive role models and caring adults are needed to empower young people to be the change they want to see in the world,” said Artis Stevens, incoming President and CEO of Big Brothers Big Sisters of America. “Right now, there are 30,000 youth across the country who need a mentor in their lives, and we hope partnering with Jackson will inspire more adults to volunteer.”

Chosen by the HFPA, the honoree(s) are traditionally the child or children of one of the industry’s most respected members of the entertainment industry and assists during the Golden Globe Awards ceremony. In 2017, the HFPA announced the honor’s new title, Golden Globe Ambassador, to better reflect the role, express inclusivity, and highlight philanthropy.

“We’re proud to welcome Satchel and Jackson Lee to an incredible roster of previous Golden Globe Ambassadors,” said Ali Sar, President of the HFPA. “Akin to their esteemed filmmaker father known for his uncompromising and provocative storytelling, Satchel and Jackson have already begun to blaze their own paths in the arts. We are honored to see how they’ll use this platform to elevate the important issues of LGBTQIA+ health and youth mentorship.”

About the Hollywood Foreign Press Association

The Hollywood Foreign Press Association (HFPA) was founded in 1943 – then known as the Hollywood Foreign Correspondents Association – by a group of entertainment journalists based in Los Angeles. During World War II, the non-profit organization established a cultural bridge between Tinseltown and millions of cinema fans around the world who demanded drama and inspiration through entertainment. The HFPA continues to do so today with a membership representing more than 55 countries. Since 1944, the group has hosted the annual Golden Globe® Awards – the premier ceremony which honors achievements in both television and film. The licensing fees from the Golden Globe® Awards has enabled the organization to donate more than $44.5 million to more than 70 entertainment-related charities, film restoration, scholarship programs and humanitarian efforts over the last 25 years. For more information, please visitwww.GoldenGlobes.com and follow us on Twitter (@GoldenGlobes), Instagram (@GoldenGlobes), and Facebook (www.facebook.com/GoldenGlobes).