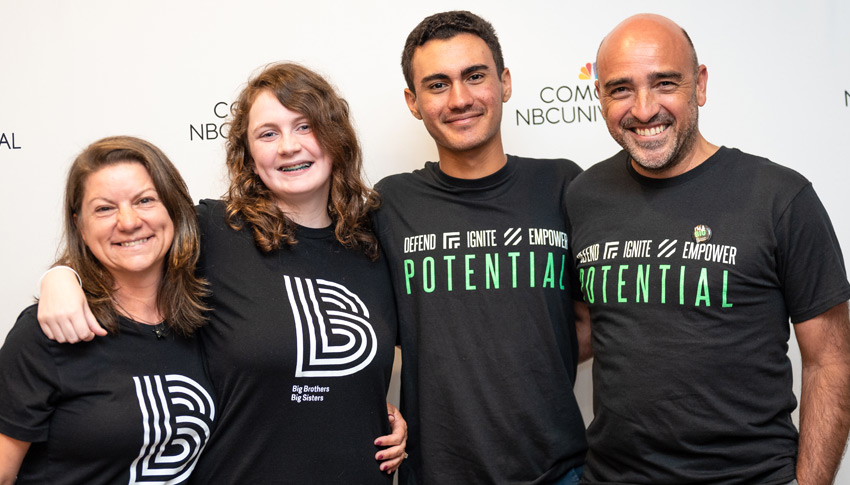 “These two Bigs have had extraordinary impact in the lives of their Littles,” says Pam Iorio, President and CEO of Big Brothers Big Sisters of America. “They represent how Bigs inspire Littles to reach their full potential.”

For the past three years, Edwards has been matched with her Little Sister, Emily, through Big Brothers Big Sisters of Atlantic & Cape May Counties, which serves the area near Atlantic City, New Jersey. Edwards is an emergency room nurse, and Emily aspires to follow in her footsteps by also working in the healthcare field.

Edwards helped Emily not only apply to a high school that would help her focus on the academics required for a career in healthcare but also get involved with a program at the hospital where she works. “I get lots of hands-on experience through this program,” Emily says, “and it’s really cool to see all the different ways you can work in a hospital.”

Jeanne has been a source of inspiration and guidance for Emily through her tween and teen years, especially during tough times for Emily’s family. “I really believe that, without Jeanne, I wouldn’t be who I am today,” Emily says.

Big Brother of the Year Hugo and his Little Brother Luis have been matched for more than a decade. When they first met, Luis was so shy and fearful that he could barely look at his Big Brother.

He was just 8 years old, but already he had been through a lot: his mom had fled Colombia when she began to receive death threats because of her work as a lawyer. They qualified for political asylum, but starting life over in the U.S. was not easy.

Now, Luis is confident and focused, and he is following in his Big Brother’s footsteps. Hugo is a financial advisor at Morgan Stanley in Miami. He first learned about Big Brothers Big Sisters from a television news segment, and when he got to work, he realized that Morgan Stanley had an existing relationship with Big Brothers Big Sisters of Miami. “It’s different to help the community by fund-raising or helping out with specific causes,” Mantilla says. “Mentoring is a journey, not a trip. Mentoring is a book, not just a chapter.”