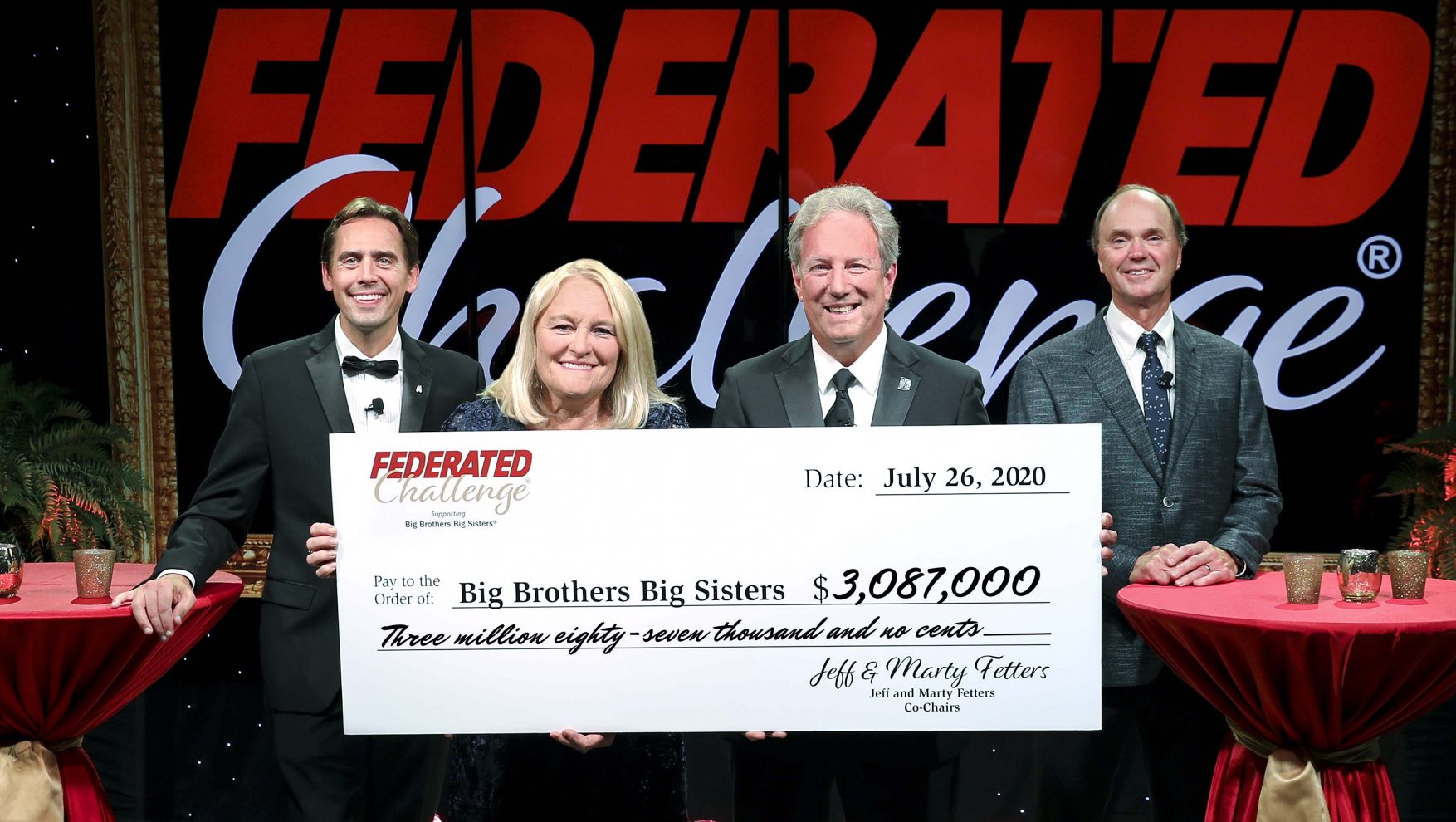 The 2020 Federated Challenge® raised a record-breaking $3,087,000 for Big Brothers Big Sisters, during its first-ever virtual gala on Sunday, July 26. Even during this unprecedented time in history, a record 61 prominent businesses and more than 500 attendees logged on to their computers and mobile devices to support youth mentoring in Minnesota and throughout America. “We knew in our hearts that canceling this year’s event was not an option,” said Federated Insurance Chairman and CEO Jeff Fetters. “And that decision became more significant this year than ever before, as many kids have been patiently waiting to be matched with a Big. Sunday’s event set that in motion – opening the door to create strong bonds and long-lasting friendships.” One hundred percent of the money raised will be donated to Minnesota’s three Big Brothers Big Sisters agencies and Big Brothers Big Sisters of America®. These organizations are creating powerful one-to-one mentoring relationships between adult volunteers (“Bigs”) and children (“Littles”). A portion of the donations are earmarked for the Federated Challenge Scholarship Program, which provides up to $5,000 per year to qualified Littles or high school Bigs enrolled in a non-four-year program focusing on apprenticeship, certificate, trade school, technical, or community college. Since the program’s inception close to 100 students have benefited from the scholarship fund and are earning job-ready training degrees with little to no debt. “Remarkable times call for remarkable people, and our generous Federated Challenge corporate sponsors and individual donors have answered that call,” said Fetters. “We may have been apart, but we still came together to help Big Brothers Big Sisters matches ignite potential.” The virtual gala – hosted by Co-chairs Jeff and Marty Fetters – featured WCCO veteran broadcaster Dave Lee. The event included special messages from members of the Minnesota Gophers athletic department, Minnesota United Football Club, and Minnesota Timberwolves. Guests also heard powerful mentoring success stories from Big Don MacPherson, Little Shakeel Nelson, and Little Isaih Handy. “Collectively, the funds we raised during this event will directly support countless young people,” added Fetters. “The Federated Challenge continues to be a first-class event, whether it’s held in person or virtually. Most importantly, it continues to rally people around a cause that empowers youth and strengthens communities. Big Brothers Big Sisters’ mission is one we proudly stand behind.” The Federated Challenge was founded in 2004 as a two-day fund-raising event hosted by Federated Insurance, a commercial insurance company headquartered in Owatonna, Minnesota. Now in its sixteenth year, this event has raised more than $41 million for youth mentoring programs.