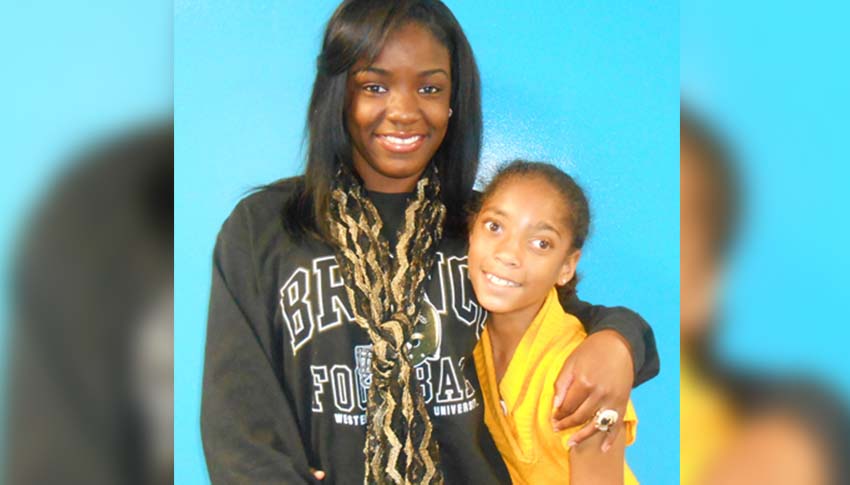 Growing up, Alexia never really had an opportunity to experience life outside of her neighborhood, and unfortunately, her neighborhood was not a positive environment for a young child. “I grew up in a neighborhood with lots of violence,” Alexia remembers. “I never played outside.” Before long, to give her more of a chance to enjoy life as a kid, she was enrolled in her local Big Brothers Big Sisters program based in Kalamazoo, Michigan. This would be the start of a life-changing experience for Alexia.

When she was in fourth grade, Alexia first met her new Big Sister Reina. Alexia enjoyed and looked forward to her time with her Big Sister, as Reina tried to provide new opportunities and experiences for her. “Every place I went with her, I’d never been there before,” Alexia says.

The pair enjoyed their time together, visiting the beach, going to Western Michigan University football games – where they even got to meet the team – and working in the garden. Because of her Big Sister, Alexia got a chance to experience a different kind of family life, sitting down to a family dinner for the very first time.

The impact that Reina had on Alexia growing up can best be exemplified by Alexia’s decision to sign up to become a Big Sister herself. “Reina is why I wanted to be a Big Sister,” she says. “She really made a difference in my life, and I want to give back.”

Alexia was first matched with her own Little Sister Amaricas three years ago. Their relationship has continued, even after Alexia started attending Western Michigan University. “I think it’s important to be a good role model,” she says. “I want to show Amaricas that there is more to life than the violence she sees. I want to show her stability, because I didn’t have that until I met Reina, so I want to be that for her.”

While it may not always be a favorite activity for the match, Alexia works hard to instil in her Little Sister the importance of paying attention to her schoolwork. Amaricas will even admit that the work they have done together has paid off, as she has noticed an improvement in her reading!

When asked what she likes about her Big Sister, Amaricas responded, “She’s nice and cute and so beautiful. She’s warm and fuzzy like a teddy bear.”

For her part, Alexia says she simply enjoys the opportunity to teach her Little Sister that “she can be smart and pretty at the same time.”