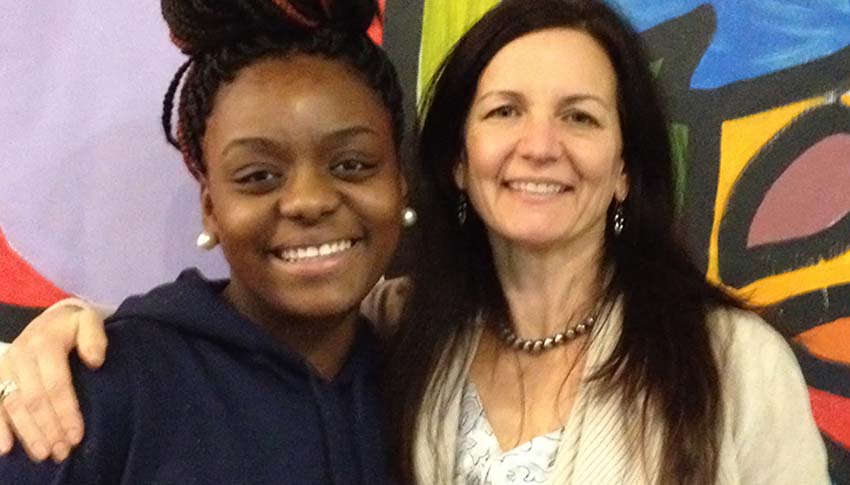 Struggling for consistency with both parents absent, Diamond’s grandmother looked at Big Brothers Big Sisters of Middle Tennessee to help her granddaughter with another adult for support. Little Sister Diamond was matched with Big Sister Janet in 2009. As Janet was getting to understand the areas that she could help Diamond with, she realized that her biggest role was simple: be there for Diamond.

“I struggled with ideas to be a great mentor, but then I am reminded by her focused attention to my words when we talk,” stated Big Sister Janet. “I don’t have to be super smart or creative here. Just be there. Just show up. Just be caring.”

When first matched, Janet and Diamond spent time at the lake, talking over dinner, or doing simple activities at Janet’s home. Their time allowed for conversation and getting to know one another. Janet and Diamond’s grandmother wanted the relationship to expose Diamond to new places, thoughts, and experiences. They both love to talk and stay connected. As they did activities, Diamond always wanted to explore that activity further. “At the end of a hike, she wants to be a botanist. I introduce her to quesadillas and then she wants to learn to cook. We talk about the office and she wants to be a businesswoman,” added Janet.

Their match has come with some challenges, however. Diamond has gone through some rough transitions at school and home. In early 2012, Diamond’s relationship with her grandmother became strained and her grandmother made the difficult decision to place Diamond into the custody of the Department of Children’s Services. Understandably, this was a heart-wrenching time for the family. While in DCS custody, Diamond struggled. She moved around multiple foster homes and would run away, then she finally found a level of stability in a group home. Throughout this time period, Janet kept close contact with Diamond and her grandmother to help where she could.

Janet loves Diamond and works determinedly to help her achieve success. Janet not only advocated on Diamond’s behalf, but she challenged Diamond to take initiative to make things happen. By taking Diamond’s hand and showing her how to be her own advocate, Janet helped Diamond find a voice in the chaos. Little Sister Diamond started to develop confidence in her abilities, talents, and above all, to believe in herself.

“Janet has been my voice when I had none. She believes in me and my family. She’s been a shoulder of support and more importantly, a real and true friend,” stated Little Sister Diamond.

Diamond often has said that Janet is someone who understands her and who doesn’t judge her. She’s someone she can talk to and who gives valuable advice. Through this advice, Diamond has been able to rise above all her challenges and is now looking forward to what the future holds.