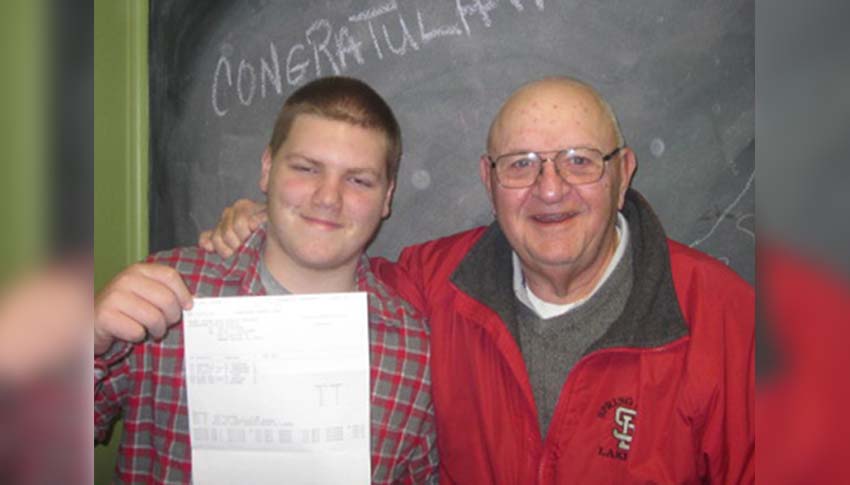 Big Brother Tom spent 40 years working in the public school system – seven years as a teacher and 33 years in administration. He coached for 30 of those years and was always motivated by the relationships he had with his teams.

“The highlight was watching students grow into adulthood and become productive members of society and the ongoing communication I had had with these people as they grew,” Tom said. When Tom retired, he missed his ability to guide and affect youth, and when he wanted to find someone to help in a similar way, he looked to Big Brothers Big Sisters of the Lakeshore for a Little Brother.

Tom was matched with Little Brother Jake, who was struggling with his parents’ recent divorce. “I watched my son go through letdowns, disappointment, broken promises and heartbreak,” Jake’s mom said. Both she and Jake knew that he wanted more. He wanted a role model to help fill a gap in his life.

Jake says his first impression of Tom was, “Wow, I though he would be taller.” Height aside, right away, he liked him. Their first outings were short. They talked about what was going on in their lives, and built trust gradually. Tom took seriously that Jake had been let down a number of times. People would often tell Jake they would do something with him, but they wouldn’t follow through. Tom wanted to show Jake that he would be there and support him.

Places with arcade games or loud music are not places where you’ll find Tom and Jake. They prefer to meet where they can talk, like over sweet tea or Coca Cola at McDonalds. Tom gives advice, listens to Jake’s concerns, and encourages him in school and sports. Over time, as Jake opened up, Tom started to get to know the boy behind the shyness.

“Tom and I now joke around a lot, but I know that when he is being serious and when it’s time for me to get to business,” Jake said. Tom and Jake were matched when Jake was 10, and at that time, Jake was struggling with school, earning average and below average grades. He was a smart kid with a lot of potential, but when he didn’t turn in his homework, he fell behind and couldn’t catch up. Big Brother Tom helped Jake work with his teacher and got him caught up with the rest of his class. Now, Jake’s mom says, Jake makes the honor roll and strives to be the best student.

Tom’s encouragement helped Jake grow outside of the classroom as well. Jake now competes at wrestling and plays football, and Tom faithfully attends his games. Jake has also become a mentor himself, working with students with disabilities and mentoring a younger football player.

He is not shy about attributing much of his success in realizing his potential to his Big Brother. “Tom changed my outlook on life,” Jake said. “He showed me that there is more to life than being angry, being sad.”