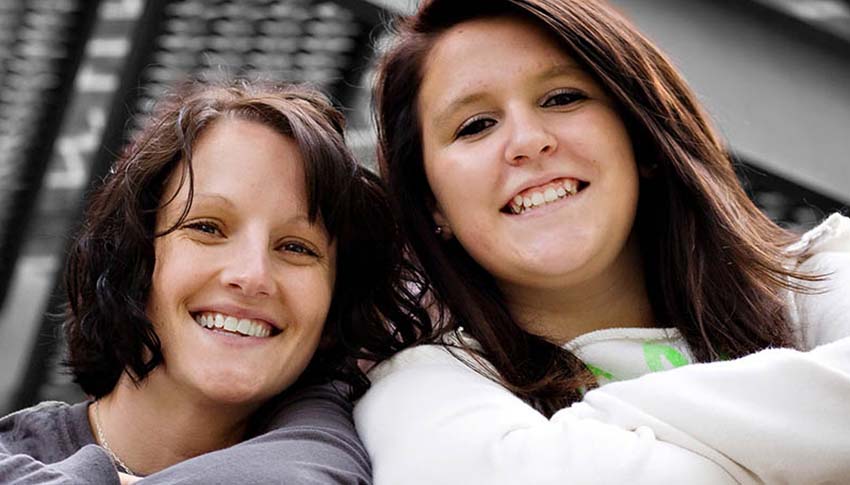 Little Sister Monica recently wrapped up her freshman year at Bethel University. She sings in the women’s chorale, she’s involved with student government, and she is the first person in her family to attend a four-year university. As a single parent, Monica’s mom says her daughter’s Big Sister was a huge help to them in Monica’s teen years. “She has guided Monica in some tough situations,” she says. “She has also helped with guiding Monica on a path to college and discussing options with her of that decision.”

Monica and Angela were matched for nine years, until Monica graduated from high school and aged out of the program. In a blog post she wrote as a letter to her Big Sister, Monica said, “Thank you for being my biggest fan. You celebrated big wins like getting into my dream college and mourned big losses like the boy I thought I would spend forever with.”

This wasn’t always guaranteed, though. When Little Sister Monica was a teenager, she and Angela hit a rough patch in their relationship. Monica was set on terminating their match. Angela held out hope that Monica would reconsider. “Months went by where the only contact Monica and I would have is my occasional text of ‘I am here when you need me’ or ‘Ready to talk when you are.’”

“I have learned a lot about myself and the person I want to be because of the amazing role model she is.”

Angela had grown to care about her Little Sister so much, she says, that she broke down several times, upset about Monica’s attitude and disrespectfulness, and the deterioration of their relationship. “Being a Big to Monica is similar to the unconditional support of true family members, and this includes the low points, too,” she says. So she stayed available to Monica and tried to understand and support her.

That kind of support is not always easy.

“Watching movies together, going to dinner, playing mini-golf – that is the easy stuff,” Angela says. “The hardest part of this program is not quitting on kids that have known nothing else. But let me tell you, if you push through those hard moments, it is worth it.”

Angela’s patience paid off. After waiting and waiting for Monica to circle back to her, Angela got a phone call. “It was Monica, crying from the girls’ bathroom at her high school. She needed me. She missed me. She knew I would pick up the phone when no one else would.”

Now, when Monica describes Angela’s impact on her life, she says she looks to Angela as a role model. “I want to show compassion to others the way Angela shows me every day. I want to be patient like Angela is with me when I’m being a teenage girl,” she says. “I want to make others smile like Angela did for me when I all I wanted was to cry in my room.”

Technically, their match ended last spring when Monica aged out of the program. But both say their relationship will continue. “I plan to be there and support her through this next phase of her life,” Angela says,“by continuing to be a listening ear, buying her meals that have nothing to do with ramen noodles, and, in four years, watching her don a cap and gown to accept a diploma.”

Being a Big may be a marathon, but the end of their official match was not the finish line of Angela’s personal commitment to Big Brothers Big Sisters. She now works for BBBS of Southern Minnesota, helping make sure more Bigs get to the starting line of their own matches.