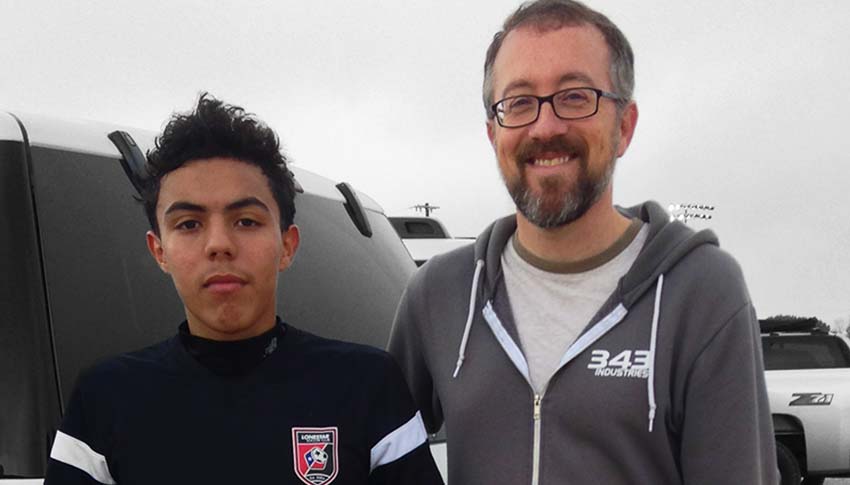 When Little Brother Miguel and Big Brother Stefan were first matched, Miguel had just lost his bicycle. Big Brother Stefan suggested they build him a new one. The first step was to find the right parts. They combed the junkyard. They sanded and painted the components and learned the mechanics of how a bike works. Over time, they built from scratch not just one but two bicycles. Big Brother Stefan confesses that he knew that while they were building the bikes, they were also building their relationship. He was teaching his Little Brother that if you want to create something good out of nothing, you have to be patient and work hard. “While many of our outings have been just for fun, like going to a movie or bowling,” Stefan says, “many have an ulterior motive as well, such as learning something new or honing existing interests, skills and talents.”

More than three years ago, Miguel’s mom signed him up at Big Brothers Big Sisters of Central Texas because she saw him developing an attitude. “My son was rebellious with me,” she says. “My son talked back to me and didn’t listen to me. He behaved very poorly at school.” Big Brother Stefan has supported him through struggles and shown him how to be patient and how to relax. “He has motivated me to do better in school and to keep going so I can one day live my dream,” Little Brother Miguel says.

Little Brother Miguel’s mom says that when he started spending time with Stefan, Miguel’s outlook changed. “My son’s attitude changed little by little. Before, he didn’t do the homework his teachers assigned him. Now Stefan motivates him in his schoolwork,” she says. “He told Miguel that if he wanted to be a famous soccer player, he would need to do well at school. Now my son thinks better, and makes better decisions about his studies.”

“Stefan has motivated me to do better in school and keep going so I can one day live my dream.”

Big Brother Stefan is a video game developer, and he has shown Miguel the offices where some of his favorite games are made. Being able to talk about video games right away may have helped Miguel bond with his Big Brother quickly, even though he admits he expected his Big Brother to be boring. “But then as we started to get to know each other he showed me that he wasn’t a boring guy,” Miguel says.

Big Brother Stefan decided to become a mentor after participating in Bowl for Kids’ Sake. After recruiting other members of the game development community to raise money and bowl with their team, Stefan began reflecting on the mission for which he was fundraising and thinking about his own life. “I recognized how a number of adults had made positive impacts on me growing up, through activities, projects, or just sharing stories and advice from life experiences,” he says. He decided to help out at just the right time, Miguel’s mom says. “If it weren’t for Stefan, my son would not be the boy he has grown into today.”