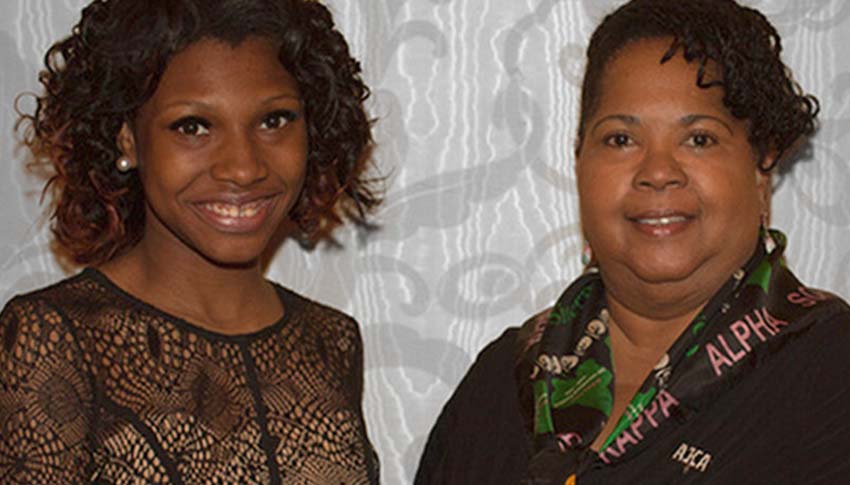 At the beginning of her freshman year, Little Sister Denitra tried out for the cheerleading squad. When she didn’t make it, she told her Big Sister, Doris, how disappointed she was. “I told Denitra that she should practice, learn as much as she could about the required stunts, and plan to try out again,” Doris says. She told Denitra to seek out a cheerleader and to get advice on how to improve. “I advised that cheerleading was no different than achieving any other goal – you practice over and over and do research on how to achieve the goal.”

When Big Sister Doris was growing up, she had a strong support network guiding her toward achieving her own goals. “I really appreciate that my parents stressed education and gave me guidance on how to make decisions on some of life’s difficult questions – how to select a college and career, how to manage money, how to decide with whom to socialize, and other key decisions,” Doris says. “I wanted to share some of that knowledge with a Little Sister.”

Big Sister Doris and Little Sister Denitra have been matched for over 10 years. Denitra was 7 when they first met. Denitra grew up with a young single mother who often held two jobs. “I am a mother of seven children,” Denitra’s mom says. “It would have been hard for me to show Denitra the genuine support and caring ways that Doris has shown to her.”

“ Doris is so full of energy even on her bad days, that she keeps on pushing and striving to be the best in whatever she does, even if it’s traveling to China or just running errands with Denitra.”
– Little Sister Denitra’s mom

Big Sister Doris has taken her Little Sister to visit nearby college campuses and encouraged her to make schoolwork a priority. “Doris helped me comprehend things I never really understood or was confused about. She has taught me right from wrong, good [from] bad, and what’s too high and what’s the perfect discount,” Denitra says. Doris has always stressed the importance of doing well in school, and Denitra has absorbed that lesson, her mom says. “My baby has learned so much and still has the drive to do what’s best in her beginning stages of adulthood, beginning with the tools that Doris has taught her,” she says.

From a curious but rebellious little girl to a driven young person, Denitra has grown a lot in the 10 years she has been matched with Doris. “Doris took Denitra under her wing and has guided her step by step on how to become a young lady,” Denitra’s mom says. Denitra now sets goals and is determined to achieve them.

“When I have exciting news, Doris is the first person I want to call and tell,” Denitra says.

With her focus on school and her ambition to be successful, Denitra has had to make lots of those good-news calls. Now, Denitra is looking forward to college. She made the honor roll. She became a member of the student council. And at the beginning of her junior year, Denitra made the cheerleading squad.