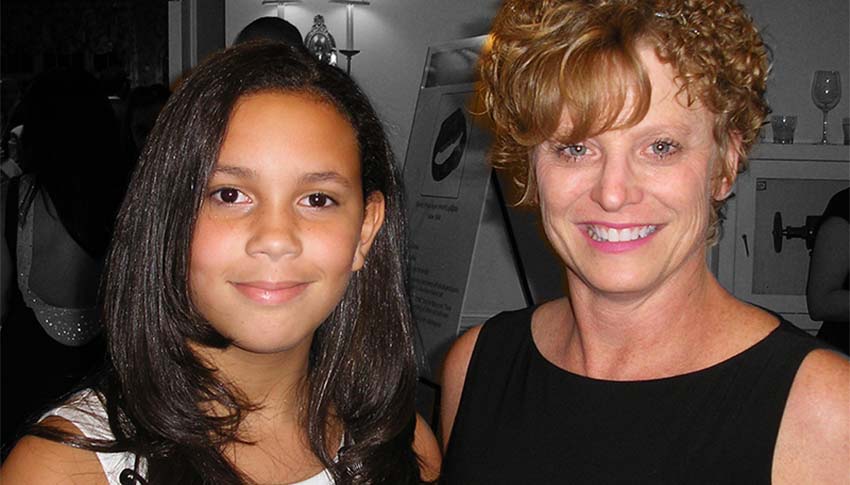 At 8 years old, Alyssa was shy. Withdrawn. She did not like speaking in front of people, and she had a hard time expressing herself. When she first met her Big Sister, Karen, she answered Karen’s questions quietly, with one-word answers.

“Do you like math?” Karen asked the 8-year-old during their first meeting.

Big Sister Karen and Little Sister Alyssa were first matched as part of Nutmeg Big Brothers Big Sisters’ Beyond School Walls program, a workplace mentoring program in which students visit an office or workplace on a set schedule and meet with their mentor, an employee of that company. Big Sister Karen is Comcast’s Western New England Manager of Community Investment. When Alyssa graduated from Beyond School Walls, the pair decided to continue their match by enrolling in the community-based program.

Big Sister Karen has made it a priority to introduce Alyssa to new experiences. “Together we have created memories of days volunteering and days spent at the library, bowling, and baking and cooking, golfing, drawing, trips to the theater, museums, bike rides, movie nights, an adventure in New York City, and walks with the dog,” Karen says. No matter what they’re doing, Alyssa says, her Big Sister always manages to teach her something.

“ I’m happy that Karen has come into my life. She makes me smile, teaches me things, and makes me feel I can do things that I thought I might not be able to do before I met her.”

Little Sister Alyssa’s mom says Karen has instilled in Alyssa the value of volunteerism, sharpened her focus on schoolwork, and brought her out of her shell. “Before they were matched, Alyssa knew very little – if anything – about volunteerism,” Alyssa’s mom says. “Volunteerism is a way of life to Karen.” Now, Alyssa believes it is important to help out in the community.

The commitment to giving back is part of what drove Little Sister Alyssa to do things she thought she would never do, like appear on television or give a speech in front of hundreds of people. So when Nutmeg BBBS selected Karen and Alyssa as a match to highlight during their gala, Alyssa was ready when the local news station wanted to interview them. “Karen helped me with what I’d say and what the TV people would ask me,” Alyssa said. “It turned out to be lots of fun. My friends and family said they watched me and that I did very well. That was the best!”

Not only did they speak on television about their match and speak in front of 300 people at the gala, but they also raised money for Nutmeg BBBS as part of a “Sponsor Our Speech” promotion. Using an online platform, they raised more than $4,000. All of this seems impossible for a girl who was first described as shy and withdrawn.

In the three years they have been matched, Alyssa has become much more confident. She hasn’t started high school yet, but her mom says she is already planning on going to college. She even ran for a position on student government.

“Karen has also helped me learn to express myself,” Alyssa says. “I used to be very shy and wasn’t comfortable speaking up in front of people. That’s not true anymore.”