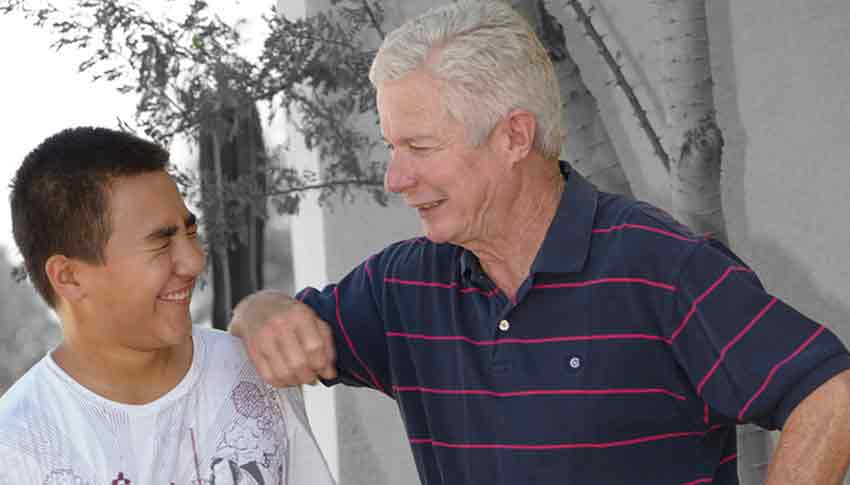 “I was providing him with a positive male figure in his life, since his father had been entirely absent,” Dick says, “and he was the surrogate grandson I didn’t have.”

Eventually, Big Brother Dick noticed that Little Brother Aaron wasn’t attending school regularly. He was supposed to be riding his bike to school, but he would often succumb to the temptation of riding off with friends and skipping class. His grades suffered.

“I decided to make it my mission to change this pattern of behavior,” Dick says. “I have two sons, much older now, and I felt this time in his life, like theirs, could very well set the pattern for his entire future.”

Little Brother Aaron’s adventures with his Big Brother out in the community were going well, but at home, Aaron’s life started getting intense and stressful. He had to leave his house and started staying with a friend, not sure how long he would be welcome. He was in desperate need of a new living situation. Big Brother Dick helped him find a group home for boys dealing with similar circumstances. “After the first year of some painful adjustments, Aaron has become the fine young man that I knew he was all along,” Dick says.

Oscar, a staff person at the home, says Dick’s influence had a major effect when Aaron was struggling at school. The staff at the home tried over and over again to persuade Aaron to concentrate on schoolwork, but nothing they did worked. No matter what, they couldn’t motivate him. Then Big Brother Dick stepped in.

“Dick attended an educational meeting for Aaron, and the fact of him being in that meeting had a deep effect on Aaron, because someone who Aaron has high respect for was hearing the areas that he was struggling in,” Oscar says.

After that meeting, Aaron went from an unmotivated student not passing his classes to an honor roll student. “When I have bad grades, he tells me to correct them and motivates me to do so,” Aaron says. Now, Aaron is doing well in his second year of high school. He has even earned a leadership role in his junior ROTC program.