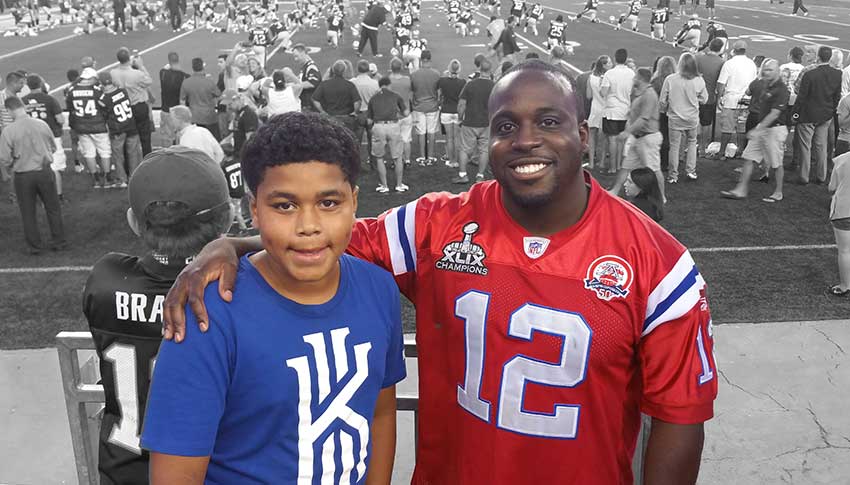 As a football coach, Big Brother Tohib saw that boys truly need positive adult role models. Growing up, he had caring parents who pushed him to reach his potential. “They never settled for ‘good,’” he says. “I always had to work harder.” With his parents’ encouragement, Tohib went to school for finance and earned his Master’s degree. He wanted to give back and help kids who might not have such positive adults in their lives, so he became a Big Brother. He was matched with Little Brother Makhari.

Makhari’s mom wanted to enroll her son as a Little Brother because he needed a role model. “He needed a stable man in his life. Makhari has a relationship with his dad, but due to substance abuse problems, his father is in and out of his life. It has never been stable,” she says. Tohib has been consistent and committed throughout their relationship, calling to check on Makhari in between visits. Makhari says he acts differently because he knows Tohib cares about his grades and his behavior. “I have someone who is looking at the things I am doing and making sure I do the right thing so I can be a good man when I grow up,” Makhari says.

Matched for more than eight years, Tohib and Makhari connected right away. They went to Patriots games and Red Sox games with tickets from Big Brothers Big Sisters of the Ocean State, and they bonded over sports.

After spending some time with his Little Brother, Big Brother Tohib noticed that he had never learned any money skills. As an accountant, he knew he could teach Little Brother Makhari about the value of a dollar. They started by opening up a bank account for Makhari. “We talked about deposits, withdrawals, keeping a ledger, and saving money,” Tohib says. “It is Makhari’s money in his account. When he earns money, I take him to the bank to deposit it. We talk about interest and how the money can grow if he keeps it in there.”

“I know I cannot slack on my schoolwork because Tohib is going to check in on me.”
– Little Brother Makhari

Their relationship has lasted eight years, but it has not been without its challenges. At one point, Makhari started hanging out with friends who were skipping school. He stopped focusing on homework, and started avoiding Tohib. Tohib tried to help, and ended up frustrated. They took a few months off from scheduling outings together.

Makhari’s school attendance and grades got worse. His mom asked BBBSOS to try to get the relationship back on track. “When our current Match Support Specialist called and asked if I could start seeing Makhari again, I was hesitant,” Tohib says. “Our Match Support Specialist, Heather, told me that she had talked to Makhari and he was ready to make a commitment to our match again. Since then, the match has been going great.”

Last October, the match participated in a walkathon, a fundraiser for Big Brothers Big Sisters. Tohib challenged Makhari to run with him the whole way. “There were a few times when I thought I was going to fall down. Tohib was encouraging the entire time,” Makhari says. “He told me we could go as fast or slow as I wanted. He said if I needed a break, we would take one. He wanted to encourage me but not let me quit. We finished the race running.”

Their relationship is like that walkathon. Makhari says when they took a break and recommitted to their match, he learned that his Big Brother would not give up on him. “Even when I wanted to give up for a while, he did not. We came back together and are even closer now.”