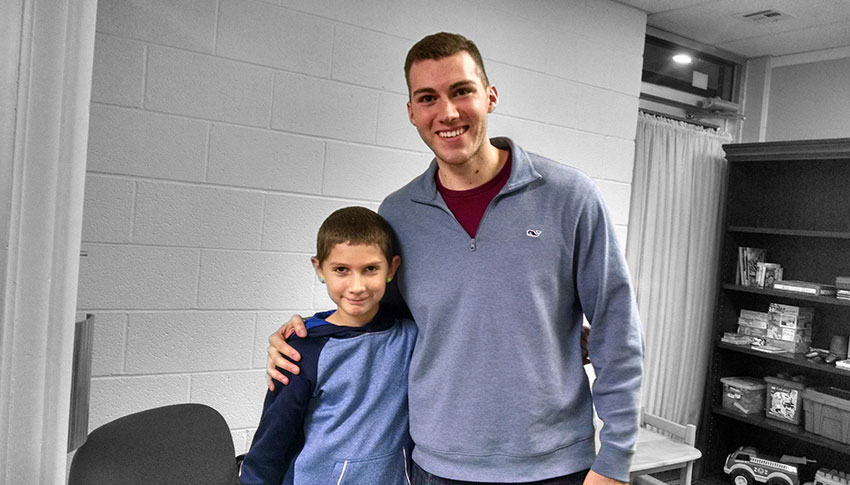 At age 10, Little Brother Nick was already skipping school, smoking, and drinking.  He was constantly bullying other kids. “My grades were all right, but I had a bad attitude about school,” he says. “I fought a lot and got into lots of trouble.”

Coping with abuse and loss in his childhood, Nick acted out in school and at home. His mom decided to enroll him as a Little Brother to give him a role model who might help him deal with hard, emotional things in a more positive way. She wanted someone to be there for her son in a way his father wasn’t, and when Nick was in fourth grade, he was matched with his Big Brother, Ryan.

“I know that if Nick is having trouble in school or something else, I can tell Ryan and he will do whatever he can to help Nick out.”

Ryan volunteered to be a Big because he wanted to give back to a boy who didn’t have a positive role model in his life. When Ryan was 13, he lost his father, but he had his own brothers to look up to. He understood how loss could affect a child and how important it is to feel supported during a time of grief.

Together, Big Brother Ryan and Little Brother Nick drive go-karts, root for their favorite college football team, and talk about whatever comes up.

Nick’s mom says Big Brother Ryan’s influence has completely changed Nick’s attitude. “I think being matched with Ryan has made Nick more mature. He is a lot more grown up than the other kids in his class,” she says.

Since being matched with Ryan, Nick has stopped using alcohol, smoking, skipping school, and bullying other kids. “I’ve changed a lot because I have a Big Brother. Ryan is like a real big brother to me,” Nick says. “He keeps me out of trouble and talks to me about safety stuff to keep me safe.”

Nick’s changes in behavior and outlook on life is important for his future. He dreams of going to college and then on to law school at University of Oklahoma, his Big Brother’s alma mater.