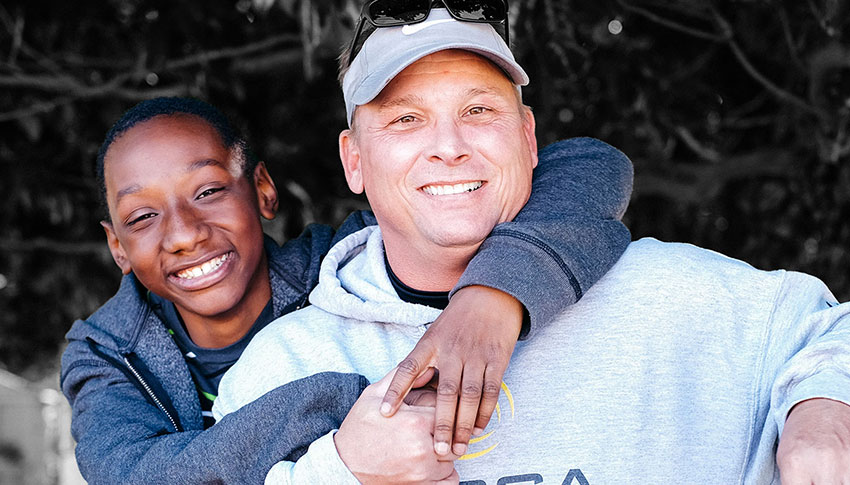 Big Brother Todd and Little Brother Tyrone, “T.J.,” were matched when T.J. was 7. At the time, T.J. was quiet and shy, and his mom worried about him growing up without a father. She was particularly concerned about his lack of interest in school. “Before Todd, it was hard for me to keep my son motivated,” T.J.’s mom says.

Big Brother Todd and Little Brother T.J. spent most Saturdays hanging for a few hours for one-on-one and family time. They often had breakfast with Todd’s parents or T.J.’s family, and then ran errands or did chores for Todd’s mom and dad, who T.J. calls “Mom No. 2” and “Dad No. 2.” After they spent time helping out, they would do something fun together. They both say that their relationship has been life-changing.

“I hope the impact I have had on TJ is as great as his impact on me.”

Spending time with Todd has helped T.J. focus and see the importance of education. Todd has encouraged him to express himself and embrace his personality. “Before I met Todd, I didn’t really think about my future. I was not sure if I really liked school,” he says. Now, he says he wants to concentrate on school so he can grow up to be a good man, like his Big Brother. He makes the honor roll every quarter. “I was relieved after Todd came into his life because now I know that Tyrone will stay in school, graduate, and go off to college,” T.J.’s mom says.

Now 13, Little Brother T.J. is nearly as tall as his Big Brother. They often joke about it. “Someday, my ‘Big’ will be looking up to me!” T.J. says.

Little does he know, his Big already does.