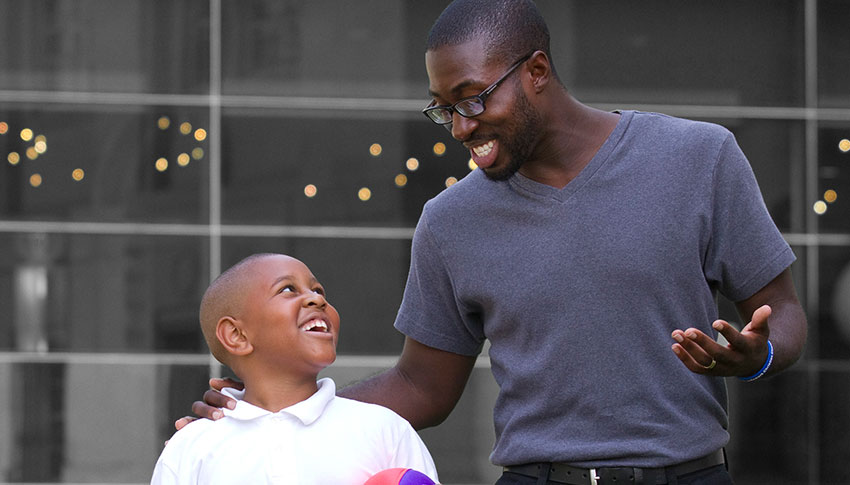 Little Brother Kaleb grew up angry and upset that his father wasn’t involved in his life. He would call and sometimes his father wouldn’t answer. His father would make plans and promises but then wouldn’t show up. “Sometimes I don’t understand why my father doesn’t want to talk to me, and I don’t know what I have done,” Kaleb says.

Kaleb wanted a male figure in his life and he says his attitude in school was a product of not having one. He was constantly getting in trouble, and his teacher resorted to sending him out of the classroom when he was disruptive.

Kaleb’s mom was at a loss when it came to her son’s behavior. “Kaleb was suspended so many times and his behavioral challenges were so overwhelming that I wanted to give up,” she says.

“It is so nice when I come home after school, and I have someone to talk to when I am feeling down.”

His teacher asked her colleague, Mr. James, to work through these challenges with Kaleb, and he was up for it.

“I ended up having to see Kaleb just about every day for poor behavior,” Mr. James says.

For months, he spent time with Kaleb when he needed discipline and guidance. Kaleb’s teacher asked Mr. James to sit in on a parent-teacher conference with Kaleb’s family. At that meeting, Kaleb’s mom mentioned that she thought Kaleb could use a Big Brother.

“As she said this, I immediately interjected and told them that I would love to be Kaleb’s Big Brother,” Mr. James said. “I also told them how great my Big Brother was and how influential he is in my life.”

When Mr. James was a Little Brother, he dealt with issues similar to what Kaleb was dealing with. His father was absent, and he was being raised in a house full of women. He needed a male role model, so his mother enrolled him as a Little Brother. “We still communicate to this day, but the highlight of our relationship was the day that he got the opportunity to meet my Little Brother, Kaleb,” Mr. James said.

Now, Kaleb is doing well in school and has been involved with the student council. He will complete his freshman year in high school this spring. “Kaleb has a 3.0 GPA now, and he can still be a class clown, but he knows how to get himself back on track.”

Kaleb and Mr. James have played laser tag and paintball together. They even have a secret handshake.

When the two make plans and promises, Mr. James shows up and keeps them, and when Kaleb calls, Mr. James always answers the phone.