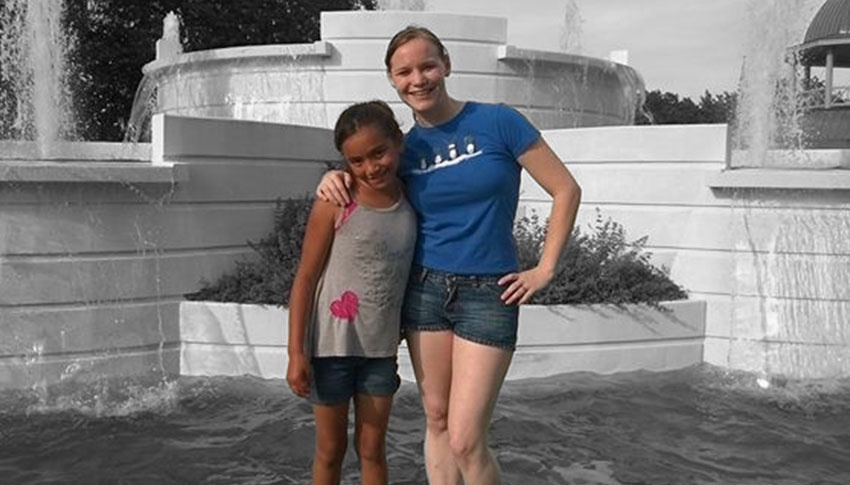 When Big Sister Gretchen first met Little Sister Brianna, she met a shy, smart, curious girl who often got into trouble. Brianna got upset quickly, threw fits, and fought with other kids. As the daughter of a single mother who was dealing with a chronic illness, Brianna’s childhood has not always been  easy.

“Because her home life was volatile, she didn’t have the encouragement to focus on school, and it showed in her grades,” Gretchen says.

The match met once a week at Brianna’s school at first. They would read or work on homework and then eat lunch and play. After a couple of school years, Gretchen added tutoring sessions to her time with Brianna. “It concerned me that such a smart girl was so behind in her schooling and that she didn’t think she was smart or capable of doing the work,” Gretchen says. They worked on Brianna’s skills and her confidence, and by the end of the year, she had made the honor roll.

“I’ve learned that just being there and being consistent is more important than quick advances.”

As their relationship grew, they eventually transitioned to the community-based program. They started doing at-home science experiments, like creating crystals. As a particle scientist, Gretchen liked sharing her love of science with her Little Sister. Making science fun and finding balance between tutoring and fun activities has been key for the match.

Brianna’s mom says that having Gretchen in Brianna’s life over the last five years has helped the whole family tremendously. “Brianna has changed a lot in the past few years. She has matured and is more interested in getting her education,” Brianna’s mom says.

With Brianna’s mom’s medical issues, Gretchen often steps in to help fill in the gaps for her Little Sister. She has attended Brianna’s parent-teacher conferences and basketball games. “She always answers my phone calls when I need someone to talk to or need help with my homework,” Brianna says.

Little Sister Brianna says she knows she has a brighter future because she was matched with Gretchen. “In third grade, I was a little shy, and now with my Big Sister Gretchen, I feel so much better,” she says. “I also misbehaved a lot, but as I’ve gotten older, I’ve become more mature.”

The two may have been creating crystals in their home science experiments, but they seemed to have already formed a perfect match.