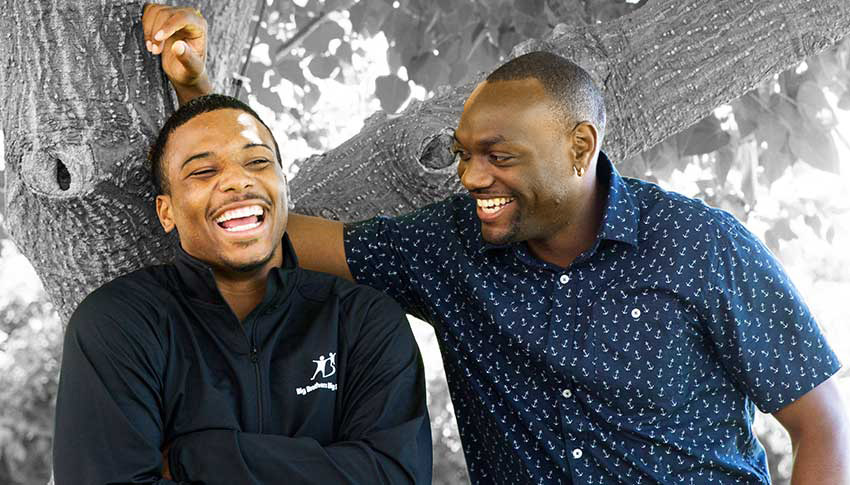 Long before Terence was walking on stage at the BBBSA National Conference to receive the 2017 Big Brother of the Year award, he was just a college student volunteering to be a Big. He had been a Little himself, and though the match didn’t last long, it left an impression on him, and he knew he wanted to give back.

His timing couldn’t have been more perfect, because he was matched with Little Brother Terrell, who his aunt described as being “in a really dark place” and “missing something.”

Terrell’s childhood had been  traumatic. Both of his parents were incarcerated, he lost his 3-year-old brother, and he  was separated from his older brother and his baby sister. As a result, he struggled with trust and anger. He wasn’t a bully, but he was a kid who reacted quickly with aggression.

“He has helped mold Terrell into a great young man, and has truly become his brother for life.”

It was his aunt and uncle who stepped in to right his course, and one of the first things they did was enroll him as a Little Brother through Big Brothers Big Sisters of Greater Cincinnati.

The family wasn’t all-in at the beginning.

“I had questions and doubts; I was worried about everything,” Terrell’s aunt says. “The last thing I wanted was to introduce him to someone new who could potentially not hang around.”

Terrell had doubts too. “With my background, with what I’ve been through in my life, I didn’t trust people a lot.”

But it wasn’t long before Terence proved he was committed to being Terrell’s Big Brother. “Terence stepped right in and before I knew it, I could see the light start to glow in Terrell again,” Terrell’s aunt says.

At first, Terrell’s story was a little overwhelming for him, Terence admits. He never pushed him to talk about his past, but stayed consistent with Terrell. About a year into their match, as they drove through Cincinnati, they passed a cemetery. “He goes, ‘my brother’s over there, he’s buried over there,’” Terence says. “When I heard that from him, him wanting to share with me, I pulled over to the side of the road and we talked about it.”

Terrell says being able to open up to Terence, and having him as a role model, has changed Terrell’s life.

“I promise you, without this program, getting matched with Terence, and my uncle getting involved, I’d be somewhere following the wrong people in the wrong crowd,” Terrell says.

Now, Terrell is focused on his future. When his friends skip class, he doesn’t join them. If they distract him from his goals, he says, they’re not his friends.

“My future plans are to go to college, join the National Guard, be a dentist,” Terrell says.

Terrell’s future plans don’t end there. At the BBBSA National Conference, he told the crowd during Terence’s introduction that he was “going to be a Big Brother like Terence and pass it on.”

Despite Terence being the award winner, Terrell’s line received the biggest applause of the night.