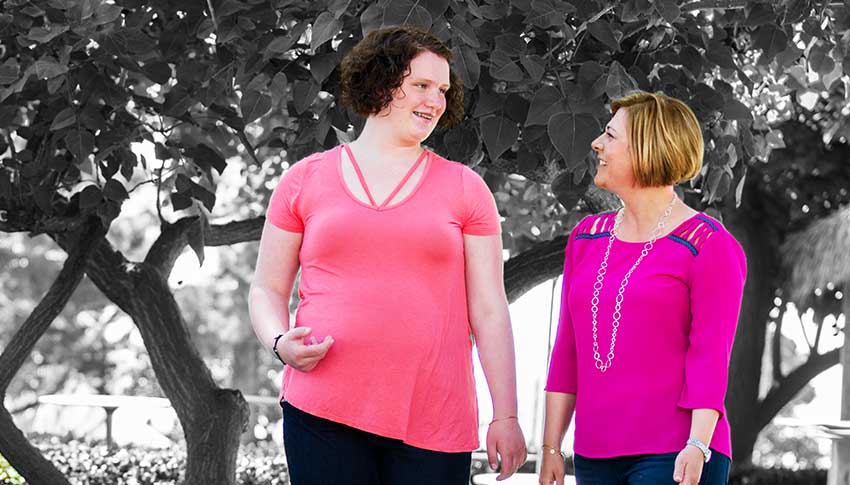 When Erin first got involved with Big Brothers Big Sisters, being named the 2017 Big Sister of the Year at the BBBSA National Conference was the last thing on her mind.

As a mother of three boys, she didn’t even become a Big Sister right away. She wanted to be sure she was ready for the time commitment of mentoring another child, so instead, she worked behind the scenes, helping with fundraisers and events. It wasn’t until she learned about the School-Based Mentoring Program, which only required a commitment of an hour a week, that she decided to become a Big.

When she first volunteered, there were no girls on the waiting list to be Little Sisters through BBBS of Alaska. The Match Support Specialist asked Erin about becoming a Big Sister to a Little Brother, but after hearing Erin was a mother of three boys, she had a change of heart.

“Something in Suzy said, ‘You know what? No. You need a little girl. Let’s just wait and find that little girl for you, and she did,’” Erin says.

“Erin exposes Noelle to opportunities and teaching moments that foster Noelle’s self-confidence and show her how to handle difficult situations and decisions.”

That little girl was Little Sister Noelle, and the two were matched when Noelle was just 6 years old. “I will never forget our first match meeting,” Erin says.  “She was this tiny little first-grader, really cute.”

Noelle says that when she met Erin, she was so nervous she could barely speak. “I didn’t want to talk at all,” she says. Erin suggested that they go for a walk so Noelle could show her around her school. Erin says Noelle “took off like a rocket,” she was so excited to show her Big Sister everything. Despite her shyness, she showed Erin a glimpse of her personality, and they bonded almost instantly.

All through Noelle’s elementary years, Erin came to see her once a week at school. They played Connect 4 and Battleship, read books, and did homework. Through Erin’s consistency, they built a bond that was key to Noelle dealing with difficulties at home.

“When I was 8 years old, there was a lot of change in my family due to my parents’ divorce. When my dad left, I did not hear from him very often, and that was very hard to deal with,” Noelle says.

“I helped her through this by being a sounding board, allowing her a safe space to talk, to share her feelings, and even draw them out. Sometimes she would shut down, and I would get her to talk,” Erin says.

When Noelle was in fifth grade, they transitioned to BBBS of Alaska’s Community-Based Mentoring Program so they could start doing activities outside the school. They made plans to go the theater, bake cookies, and visit museums.

“Before I met Erin, my life was crazy, and I never got to get out of the house, except for school,” Noelle says.

With Big Sister Erin, she began to explore the world outside her home and develop her creative side. Noelle is interested in fashion, so Erin got her an art set for designers. Big Sister Erin even put her own shyness aside to walk in a charity fashion show with Noelle to help build her confidence.

At the National Conference, Erin and Noelle both took the stage to accept the Big Sister of the Year award. Noelle showed some of her keen fashion sense in a dress she picked out herself and a beautiful necklace.

The two look like an inseparable pair, but Erin doesn’t like to overcomplicate her role. “More than anything,” she says, “just being Noelle’s friend/mentor, a person who cares, is all that’s really needed.”