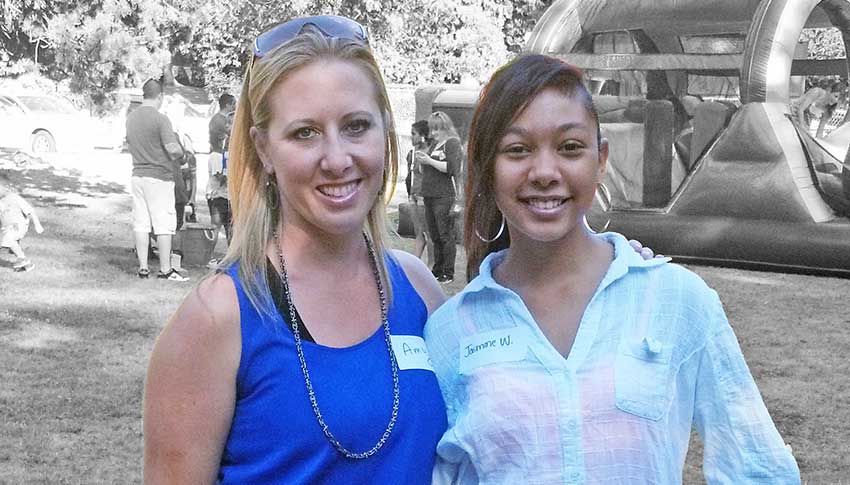 When Amy signed up to become a Big Sister, she envisioned being matched with a 7-year-old. She thought she’d spend time with a little girl who would do crafts and run around on the playground. Instead, the staff of BBBS of Puget Sound asked her, would she be willing to be matched with a teenager?

A thousand questions ran through her mind. “What if she didn’t like me?” she thought. “I mean, I guess any age match could potentially not like me, but a teenager?”

The staff told her more about Little Sister Jasmine, and the more she learned how much they had in common, the more comfortable she became with the idea of being matched with a 13-year-old.

“Amy holds me accountable and reminds me that every decision that I make is important to my future.”

“It was on our one-year match anniversary that I knew we had formed a bond that would last a lifetime,” Amy says. “To celebrate, she wrote a song for me about what I meant to her, and then she and her younger sister performed it for me. Of course, I cried.”

Jasmine was sure of their bond much more quickly. “When I first met my Big, I was in seventh grade, and although I didn’t know how to show it very well, I loved her from the first time we hung out.”

In the five years since then, Amy and Jasmine have spent time cooking and doing craft projects, but as Jasmine grew older, they spent more time on practical goals. They studied for Jasmine’s learner’s permit. They crafted her resume, practiced interviewing, and got her a part-time job at Starbucks. They searched for scholarships and planned for Jasmine’s transition to college. She received a full scholarship to Stanford University.

“Over the past five years, our relationship has grown and evolved,” Amy says. “I have watched her change from a young girl in grade school who was still unsure of herself, to a confident young woman soon to graduate high school who has an exciting, amazing future in front of her.”

Amy may have envisioned something different in the beginning, but a bond as strong as theirs can sometimes be hard to imagine.