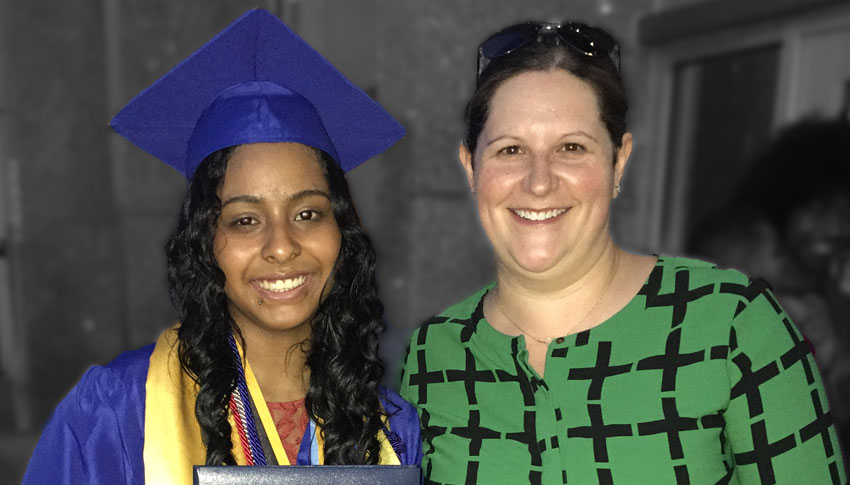 Nearly 10 years ago, Little Sister Jasmine was matched with Big Sister Jesse through Big Brothers Big Sisters of Greater Kansas City. At the time, Jasmine thought that attending school was a low priority. If she missed the bus or just didn’t feel like going, she would stay home.

“There would be weeks when she would tell me about going to school only once or twice the entire week,” Jesse says. “I started to express the importance of not only getting good grades, but also attendance.”

Jesse did more than just express the importance. With her actions, she showed the importance. When Jasmine woke up late and missed her bus, Jesse would give her a ride to school. Jesse felt that it was better to arrive late than not attend at all.

“She’s someone I can talk to and call on for help with anything.”

Over time, Jasmine’s absences dwindled and so did her need for Jesse’s rides. Attendance had become a priority, and she never went back to her habit of waking up late and missing her bus.

“It was amazing to see her transform and really start to care about school,” Jesse says. “She would be so excited at the end of a week that she attended school every day. She would get in my car and light up telling me about it.”

By the time Little Sister Jasmine entered middle school, her focus shifted from just attending school to exceling at it. She stayed caught up on her schoolwork and pushed herself to do even more. At the ceremony for students finishing 8th grade and entering high school, Jasmine gave a speech as the class valedictorian. She credits Jesse for her success.

“Without her help, these things wouldn’t have happened,” Jasmine says. “She’s the extra motivation I need sometimes for whenever I change my mind or want to give up. She’s an amazing Big Sister and a very good role model.”

Jasmine’s academic success is only part of their match. They talk a lot about goals and schoolwork, but they also enjoy baking desserts, visiting parks, and attending concerts. Jesse also helped Jasmine land her first job at a local AMC.

“Sometimes I forget that the program is the reason I met her,” Jasmine says. “I don’t see her as just a match through the program, I see her as an actual Big Sister.”

Jasmine recently graduated high school and is now in college. She attends one of the schools that she and Jesse visited together on a college tour. When Jasmine loaded her stuff into her freshman dorm room, Jesse was there with Jasmine’s entire family to help her move in.

The school is in a different city, so Jasmine can’t quite get Jesse to give her a ride if she wakes up late, but the things Jasmine learned from Jesse will always be with her.