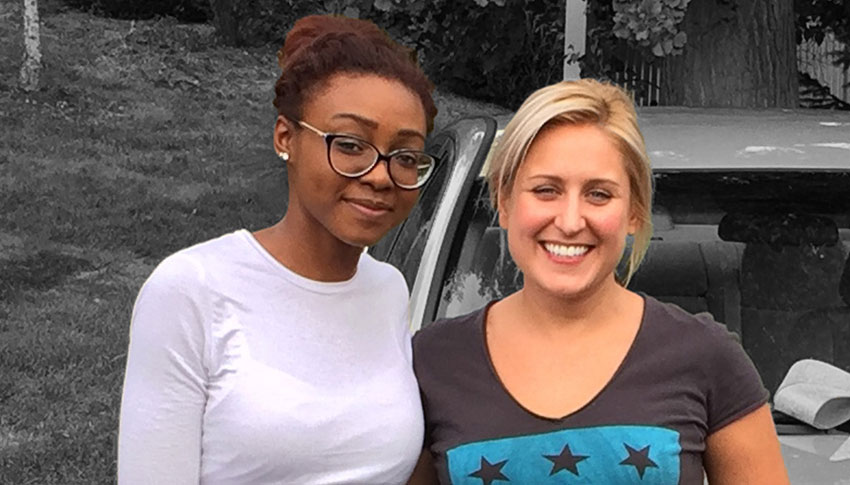 At a young age, Little Sister Grace was adopted along with her twin brother and older brother. Her adoptive parents signed her up to be a Little, hoping she could get a Big Sister that could spend one-on-one time with her. In Big Sister Erin, Grace got that and so much more.

Erin had been looking for a way to give back to her community and being a Big Sister sounded perfect to her.

“A friend of mine had recently become a Big Sister and had been telling what it was like to have a new Little Sister who needed her so much,” she says. “So I signed up.”

Soon, Grace and Erin were ready for their first official match activity. Erin decided that baking might be a fun way to kick things off, but it didn’t go exactly as planned.

“If you know me, you know I’m a great cook, but a horrible baker,” Erin says. “It’s an art in which you have to follow the rules to the T, and that has never been my strong suit.”

“I’ve been allowed the privilege to watch her grow, stumble and fall and always get back up and move forward.”

“Her mixer literally blew up while she was mixing the ingredients together,” Little Sister Grace says. “We had to stop everything we were doing and go buy a new mixer so we could finish.”

In the eight years since, the two have raced on Mario Kart, studied vocabulary flash cards, fed ducks, and done so much more. They have found a real passion for giving back to their community, volunteering with Meals on Wheels, collecting toys for children during the holiday season, and stuffing buses full of school supplies.

Thanks to her match with Erin, Grace has grown into a generous, kind, responsible young woman who works hard and truly enjoys giving to others.

Grace’s parents think that one reason Big Sister Erin and Little Sister Grace developed such a special bond is because Erin was adopted, too.

“Trying to discover who you are is hard enough for each of us, but figuring that out without ever knowing your biological parents adds so many more challenges,” Grace’s mother says. “With Erin’s support, Grace has avoided so many pitfalls, helping her to navigate the difficulties and struggles we could never totally understand.”

In those years since nearly blowing up the kitchen during their first attempt at baking, the two have created an unbreakable bond that will continue long after the match ends.

“I’ve watched her grow in to an amazing young adult who has the opportunity to be great and make a difference in the world,” Erin says. “And at the same time, Grace has shaped who I am. Even though our time in the program is coming to an end, I will always be her sister and she will forever be mine.”