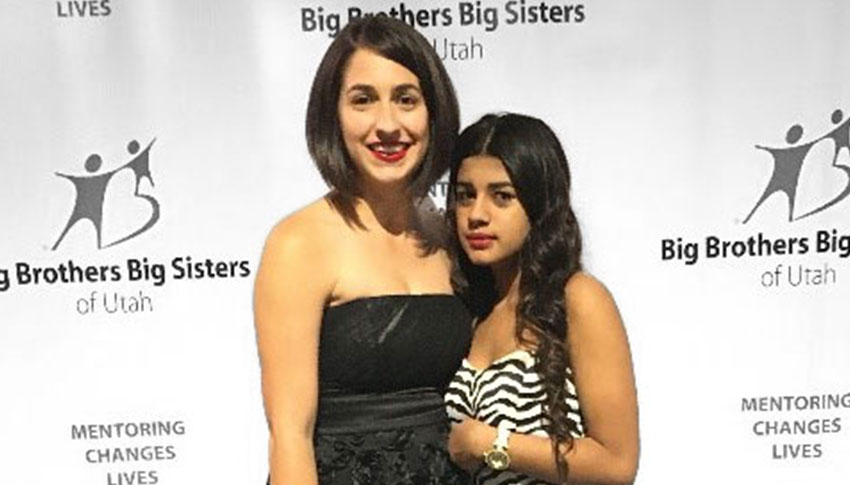 One of the first things Annie did when she moved to Salt Lake City was look into volunteering with Big Brothers Big Sisters. As she was going through her trainings and waiting to meet her Little Sister, Annie started learning things about her new home. One of the things she learned was that Salt Lake City has a large refugee population. During her interview with Big Brothers Big Sisters staff, they asked if she would be interested in being matched with a refugee youth.

“It was as if the person interviewing me looked right into my soul and saw something that I didn’t know about myself yet,” Annie says. “I immediately knew that I would prefer to mentor a refugee youth.”

Annie was matched with Little Sister Sabina, who was a 6-year-old Nepali refugee. Sabina had watched her older sister get a Big, and she was excited to meet her own Big Sister. When the day came to meet her Big, Sabina was a lot shyer than she expected.

“I know that I’m Sabina’s mentor and that there are probably a few things she has learned through our relationship and interaction, but I think I’ve benefited from this relationship the most.”

“Sabina was very quiet, and her sisters were talking to her in Nepali telling her to sit by me and talk with me,” Annie says. “Thinking back on that moment gives me such joy and it also makes me laugh because Sabina is anything but nervous and quiet now.”

At the time Sabina admits to feeling lost and having few friends outside of her family she could count on, but as the outings with Annie continued to happen, Sabina shed her shyness and began to appreciate Annie’s role in her life.

“As a refugee with no English, getting the privilege of having a mentor was an amazing opportunity,” Sabina says. “Meeting Annie was really one of the best things to happen to me.”

The two enjoyed getting manicures, visiting museums, and window shopping at the mall. Annie has helped Sabina with her schoolwork by reading with her at the library and challenging her with math problems while in the car. Sabina’s mother says she has noticed the positive impact that Annie has had on her daughter.

“Sabina has gone from very shy and quiet to a young woman who is very nice and confident. Annie has helped her become this by being her sister and friend,” Sabina’s mom says.

Sabina hasn’t been the only one to grow during the course of this match. Annie says she knows she has benefited from the relationship as much as her Little Sister. Being introduced to Nepali culture and getting to know Sabina’s family has changed her life.

“The trust that her parents gave me immediately after meeting them was also inspirational,” Annie says. “The family has taught me so much about acceptance and love and because of my relationship with them I have become an advocate for refugees here in America.”

Annie has become more than an advocate. Nearly a year ago, Annie and her husband began fostering two refugee girls from Somalia, and now are caring for them as parents. Annie adding two kids to her family has not led to any jealousy in the parties involved, but instead to admiration.

“My daughters saw our relationship and wondered if they too could have a Big Sister,” Annie says. “I’m very happy to report that both of them now have their own Big Sister through the program.”