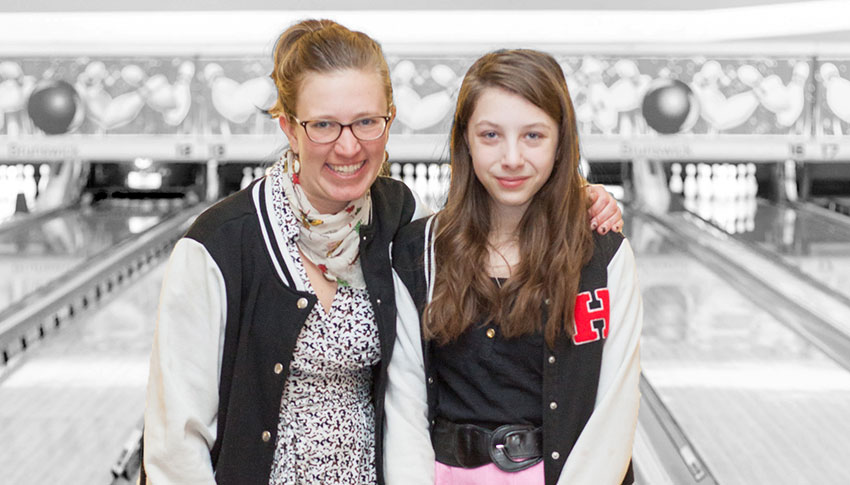 Growing up without a father or mother for any length of time is one of the hardest things a child can experience. When Little Sister Rustie was 2, her mother decided she no longer wanted to raise her. When Rustie got older, her father was incarcerated. After a stint with caregivers, Rustie went to live with her grandparents.

Her tough early childhood meant that Rustie struggled to make positive choices and fit in with her peers at school. To help change that, her grandmother signed her up to be a Little.

Big Brothers Big Sisters matched Rustie with Big Sister Elena, who had worked as a staff member at a children’s hospital, where she learned how to handle stressful situations with children  with various behavioral and mental health concerns. Despite her Big Sister’s credentials, Little Sister Rustie wasn’t immediately impressed.

“The first time I met Elena, she was shy and quiet, and I thought, ‘this isn’t going to work,’” Rustie says.

Their first outing together changed things. They went to see “Big Hero 6,” on a special themed night where the movie theater encouraged moviegoers to dress up as their favorite superhero. Rustie didn’t have a costume, so Elena made something for the two of them to wear: matching red and purple capes.

“I think someday I will be a Big too and make a sad girl feel happy and special.”

They became their own superheroes.

“Nobody ever made me something like that before,” Rustie says. “I had fun, and she made me feel like I was special.”

A month later, they attended a superhero event at the carousel, so once again, they wore their capes.

As time went on, Rustie began to see Elena as someone she could talk to about friendship issues, and someone who wanted to spend time with her hiking, rollerblading, and ice skating.

One of Rustie’s favorite memories of their match is a time that did not go as planned.  Elena’s car broke down, and she and Rustie had to walk to get help. On that walk, the two talked nonstop. “I just felt like she was listening to me and giving me good advice.” Rustie says. “That was when I knew that she really cared about me.”

Elena has also helped Rustie maintain a relationship with her father. Elena often takes photos of things they do together for Rustie’s grandma to share with him. “He has written me in gratitude for my time spent with Rustie, and I can tell by his words that his daughter means the world to him,” Elena says. “I can tell by the excitement in Rustie’s voice when she talks about her dad how fond she is of him.”

The strength of their match is undeniable, but Elena doesn’t like to take any of the credit. She gives it all to Rustie.

“Rustie is an incredible, strong girl and she makes me look good as a Big Sister,” Elena says. “Learning what a huge difference simply being present can make for someone has been a very powerful lesson to me.”

Since the two were matched, Rustie has started to deal with some of the challenges that brought her family to Big Brothers Big Sisters years ago. Now, she is often first in her class to finish projects. She has made friends at school and is always eager to tell Elena about her social life.

“I have watched Rustie develop into a fun loving and confident individual,” Rustie’s grandma says. “Elena is someone Rustie has been able to connect with and turn to for advice and guidance as well as be introduced to a wide variety of experiences she otherwise would not have had.”

Rustie’s childhood circumstances may have led her to think she needed a Big who would be a superhero, but as it turns out, she only needed Elena, who gave Rustie her own cape and showed her she could be her own hero.