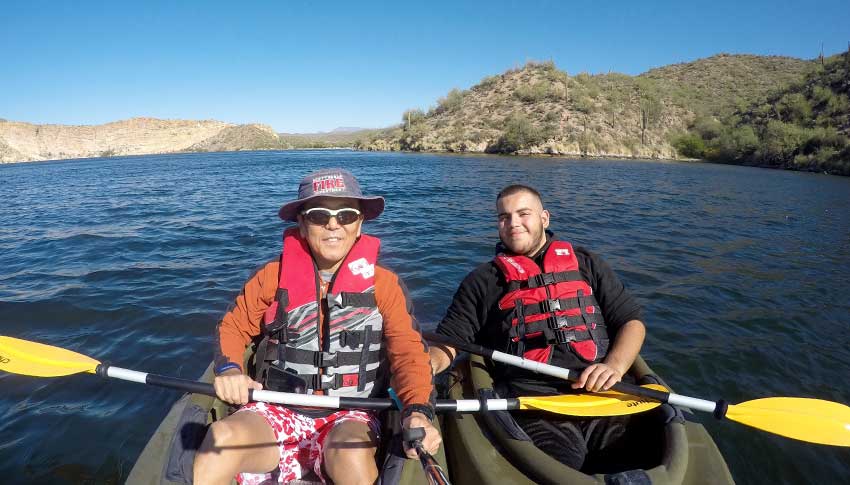 Big Brother Toru has great memories of his early childhood in Japan.  But when he started junior high, he says, life got a lot harder.

“I was pressured to succeed academically, and it was unbearable,” he says. “I was not a bad student, but a lost student. I wasn’t focused and I didn’t have goals.”

Toru remembers it taking a long time for him to overcome the pressure of those years. He came to America to find a new life, and when he worked as a firefighter and later a photojournalist, he was able to find mentors who showed him the way forward.

“In each job, I was blessed to have mentors who took me under their wing and guided me through the ups and downs of life and my career,” he says. “Had I had these dedicated mentors when I was younger, my childhood in Japan would have been very different.”

“I don’t know if I will ever be able to show him how much he means to me.”

Toru decided that he wanted to be that positive force for someone else, so he decided to become a mentor.  He signed up to be  a Big Brother, and he was matched with a 6-year-old named Javi.

Even at such a young age, Little Brother Javi was already going through a lot. His father left the family when Javi was a year old, his sister had recently been diagnosed with lung cancer, and he was struggling at school. There were so many things that Javi couldn’t control. Toru started by focusing on what Javi could control — school.

“I reminded him of the importance of doing his homework and studying, and soon his grades improved,” Toru says. “I saw the potential he had to be better than his past grades. He just needed someone to encourage him to succeed.”

Their match has only grown since. They have developed a love of for the outdoors, often spending their free time going hiking and kayaking. Javi has grown, too, going from a 6-year-old to a 6-foot-tall, 230-pound defensive lineman playing varsity football. Through it all, Toru continues to be one of Javi’s strongest supporters in all areas of his life.

“I remember one time, he came to one of my football games and I was not doing too great in the first quarter,” Javi says. “Then, I looked up and saw him and my mom watching and cheering me on. I’m pretty sure that game ended up being one of my best.”

With Javi now 16 and right around the age when the pressure of Toru’s adolescence became overwhelming, Big Brother Toru is committed to continuing to providing his support, not applying pressure, so he can succeed.