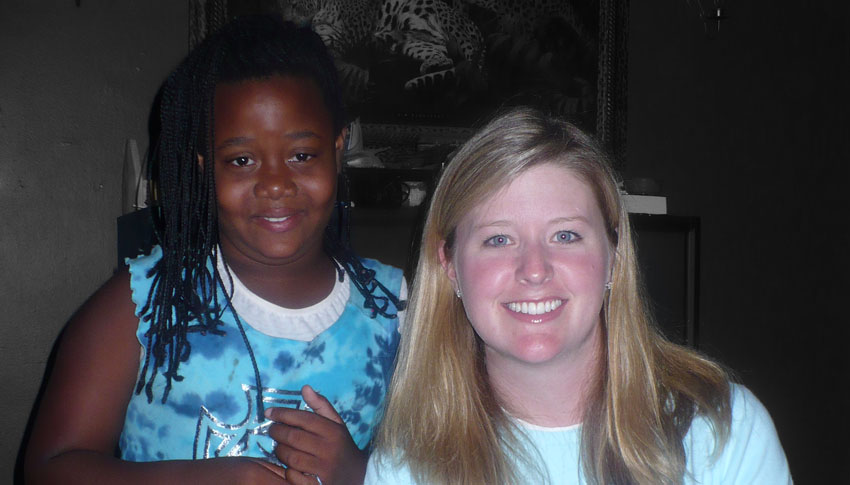 At the beginning of Boshanna’s senior year, her best friend and her brother were involved in an incident that resulted in their arrest. It hit Boshanna hard. Big Sister Karen remembers it being one of Boshanna’s lowest points.

“Boshanna was devastated and depressed,” she says. “She stopped going to school.”

For four months, Boshanna didn’t attend school. Even when she faced truancy court, her dedicated Big Sister never lost faith in her. They talked about it, and Big Sister Karen let Boshanna know she was disappointed and that she felt graduating high school was crucial.

“I feel she believes in me a little more than others.”

Eventually, Boshanna decided to return to school and finish out the school year. She credits Karen for helping her turn things around.

“I would have dropped out of school if it were not for Karen,” she says.

Big Sister Karen has been there for Boshanna since they shared their first match meeting at a McDonald’s.

“She was a quiet 9-year-old,” Karen says. “I was nervous, excited, and hopeful.”

Boshanna was growing up in a home affected by depression and substance abuse. Her grandmother enrolled her as a Little Sister to bring a little more stability to her life.

Their connection wasn’t always strong. In the beginning, Big Sister Karen says, she couldn’t get a read on Boshanna.

“I often left our visits wondering if she was enjoying our time, looking for reassurance, unsure if I was doing any good,” Karen says.

Karen remained consistent. She tried to show Boshanna she cared about her and wasn’t going anywhere. She delivered balloons to her school on her birthday, helped her shop for school supplies, and listened to her when she needed an outlet to talk about her family.

Over time, their connection solidified and they began scrapbooking all their adventures. Before they knew it, that scrapbook was overflowing.

“We have been paired for eight wonderful years,” Boshanna says. “I enjoyed every bit of it.”

Since her return to school, Boshanna has been exceling in the classroom, and she has resolved to succeed in all aspects of her life. She recently got a job at McDonald’s, the place she first met Big Sister Karen.

She quickly mastered every station at the restaurant. Many teenagers might spend their first paycheck to go out with friends, buy new clothes, or save for a car. Boshanna had something else to buy first: her cap and gown.