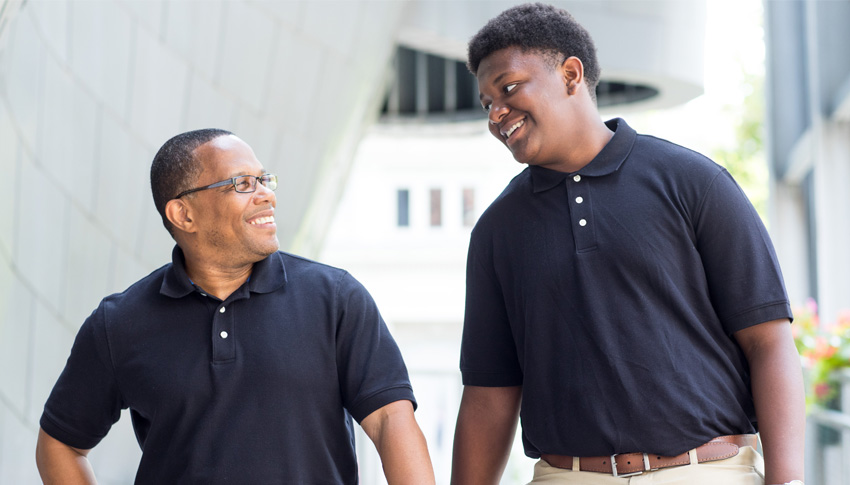 While Little Brother Jolen was waiting for three years to be matched with a Big Brother, his mom kept him engaged with Big Brothers Big Sisters Services in Winston-Salem, North Carolina, by taking him to agency events for “unmatched Littles.” She says she knew early on how important it would be for Jolen to have someone to look up to.

“Jolen was six years old when I decided to enroll him in Big Brothers Big Sisters Services,” Jolen’s mom says. “His father had been incarcerated since he was a baby, and I wanted him to have a network of positive men doing positive things.”

When Jolen was 9, he finally got his Big Brother. He was matched with Murray, who he calls “Mr. Miller” because his mom emphasizes manners.

Murray had worked for over 20 years with inmates at the local detention center, helping them earn their GEDs. He decided that instead of working with dozens of men and women at a time who had already gotten involved with the justice system, he wanted to focus his attention and energy on one young person. He wanted to intervene at a point in someone’s life when he could help make sure they never got onto the wrong path.

“This match requires me to lead by example and illustrate what it’s like to live as a productive African-American male in society.”

Big Brother Murray first bonded with Jolen over sports and then discovered that Jolen also liked visiting art museums. As a result of being matched with Murray, Jolen became open to new events and activities he hadn’t experienced before. “Jolen is a quiet but in-touch young man who is very cultured in life,” Murray says.

Murray’s role in Jolen’s life was tested when Jolen was in middle school. “Jolen had become a bit of a show-off,” Jolen’s mom says. “He’s a big boy, and tall, which made him popular. He’s also very silly and people even began to label him as a bully.”

Jolen’s mom reached out to Murray for help. He reassured her that Jolen was figuring out who he was, and that Jolen had time to get it right. Murray became Jolen’s voice of reason. When he started to give in to peer pressure, Murray would give Jolen alternatives.

“Watching Jolen grow up into who he is now, he’s not a young man who follows the crowd. He’s confident and sure of himself,” Jolen’s mom says. The confidence shows up on the football field, too. Jolen is determined to play college football. He says he remembers vividly the first time he realized that playing college ball was a possibility for him. Big Brother Murray, Mr. Miller, had taken him to Wake Forest University for an event with Carolina Panthers linebacker Thomas Davis. They toured the stadium, and Jolen imagined himself playing in a stadium like that.

“After the tour, we had dinner and Thomas Davis talked about his story and how he made it to the NFL,” Jolen says. “That day, Mr. Miller helped me see that if Thomas Davis made it, then I can, too. I can do anything.”

Jolen really can. At the 2018 Big Brothers Big Sisters National Conference, he spoke in front of a crowd to introduce Mr. Miller to the world as the 2018 National Big Brother of the Year.