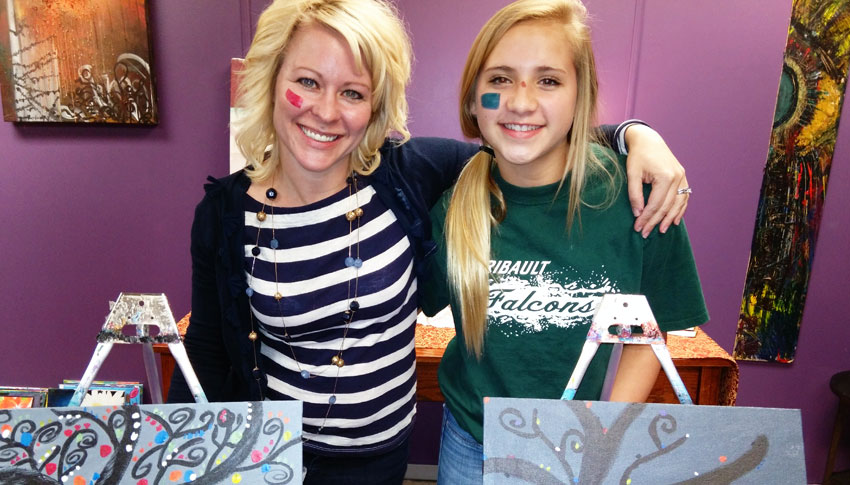 From a young age, Sky felt her life spinning out of control. She grew up in a home with drug use and physical abuse, witnessed her house raided by police, and, at one point, was physically abused herself. She knew that she couldn’t live there anymore.

She moved in with a friend before finding a stable guardian in a different part of town. She found even more stability when she was matched with her Big Sister Jess through Big Brothers Big Sisters of Southern Minnesota.

They didn’t have the typical journey to becoming a match. When Sky moved and enrolled at a new school, she was struggling in her personal life and academically. Her new guidance counselor was worried about her reaching her full potential and expressed concern to his wife, Jess.

“There is one certainty in this plan–I will be there to support her every step of the way.”

“[He] came home and said, ‘Jess, do you know a Sky that went to Washington a couple of years ago?’” Jess says. “I said, ‘Oh my gosh, I probably talked about her every day. Why?’”

Jess’s husband explained that Sky was a new student at his school. He wondered if reconnecting the two of them might be good for Sky. Jess expressed interest, so he checked in with Sky to see how she felt.

Sky was more than up for it. Jess had been her fifth-grade teacher, and Sky vividly remembered the first time they met — she was in third grade, and she had fallen down the stairs. Jess remembers it too.

“I happened to be walking in the hall when several little girls breathlessly told me Sky fell and was hurt,” Jess says. “I scooped her into my arms and brought her down to the nurse.”

From that moment on, Jess kept an eye on Sky.

“I noticed she would go out of her way to acknowledge me,” Sky says. “She was persistent in making sure I knew she cared. I didn’t always make it easy for her, but she never gave up on me, and that’s what I remembered about her.” When the two reconnected in Sky’s middle school years, Jess knew she wanted to help her get through this tough time. She also knew she couldn’t do it all alone, though. She wanted the relationship to be supported and have set boundaries, and she thought Big Brothers Big Sisters would provide the perfect support system for them.

“I called Big Brothers Big Sisters and explained the situation, asking if it was a possibility for us to be matched,” Jess says. “Although they told me they couldn’t guarantee it, I had a peaceful feeling that all would work out as it should.”

After the vetting process and background checks, Jess and Sky were officially matched as Big and Little Sisters. Since then, Sky has grown both personally and academically. She says she has Jess to thank for her growth.

“She was there for me when I was down and at my lowest and she’ll be there when I’m up,” Sky says. “If I didn’t have that consistent reminder, I would probably have given up a long time ago and gone down the same road as my mom.”