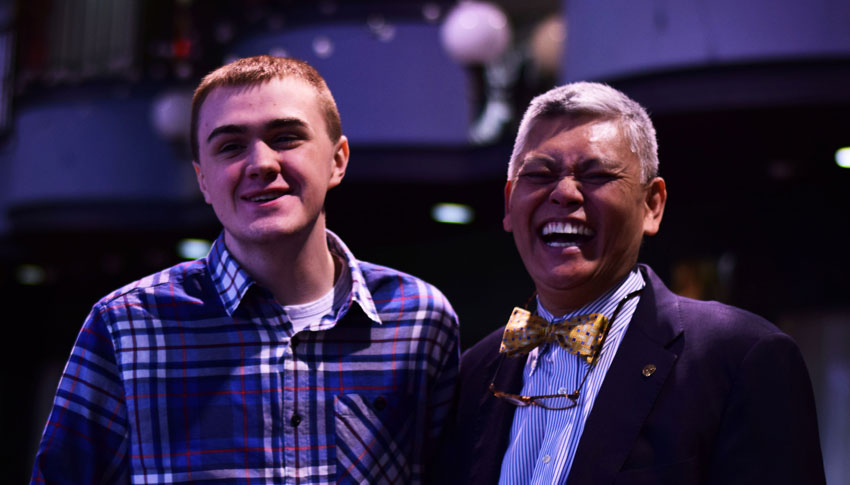 At the age of 2, Little Brother Baylee lost his eyesight. As he grew up, his mother wanted a mentor for him because his dad wasn’t involved in his life, but she wasn’t sure if there would be a Big Brother who would be willing to be matched with a Little who is blind. Big Brothers Big Sisters of Northeastern Wisconsin talked to Big Brother Al, and he didn’t balk at being matched with a blind Little Brother. They have been now been matched for nearly eight years.

“From the moment [our match support specialist] introduced us, we both knew we were the perfect match for each other,” Al says.

Baylee has always been bright, thoughtful, and sensitive, but since being matched with Al, he’s become a drummer, a fisherman, and a student scoring in the 93rd percentile of the ACT. Some of his favorite memories with Al have been fishing at the Wildlife Sanctuary, discussing his big future plans, and having dinner together.

“I can talk to him about anything I need to, and he’ll provide candid, wise advice, and he’ll help me solve my problem.”

“Since Al came into Baylee’s life so many years ago, he has helped Baylee grow as a person, a friend, and a fine young man,” Baylee’s mom says.

Baylee also gives credit to Al for helping him accomplish many of his goals — some of which have to do with his disability — learning to use his cane more proficiently, getting a seeing-eye dog — and some of which are common to all teens — like figuring out where to go to college and how to apply for scholarships.

“He’s taught me if I want to take off in the world, be a writer, be an author, a husband and a father sometime in the future, that I need to work for it: practice my writing, work with people,” Baylee says. “He’s taught me to work my hardest to achieve the most.”

Al wasn’t the only one teaching. Baylee also taught Al a lot, like often how a person like him sees the world. When Baylee watches movies, he listens to a descriptive audio track that explains what’s happening on screen. When he’s playing video games, like Wii Baseball, he listens closely to the sound to know when to swing. Al doesn’t let him win.

“Baylee consistently hit homeruns,” Al says. “I would throw a pitch, Baylee would swing the remote paddle, the sound of bat hitting the ball, and Baylee would say, ‘That was a homerun, wasn’t it?’”

In the game, after the ball is pitched and as the ball approaches home plate, the sound changes. Baylee listens for that and times his swing perfectly. Al says these interactions have taught him a lot, and he admits that Baylee always beats him.

“I have learned so much from Baylee,” Al says. “Probably more than Baylee will ever learn from me.”

Baylee might debate Al on that, but there’s no denying that Al, Baylee’s mom, and Baylee have worked together to help Baylee reach his potential.