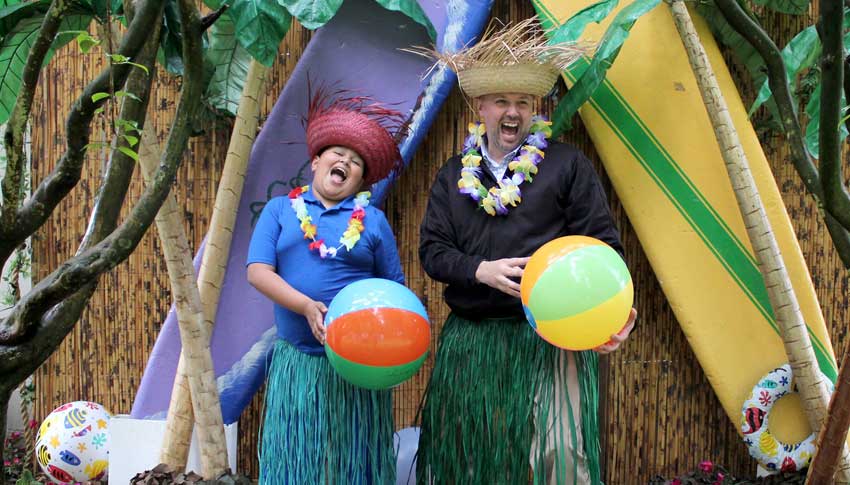 When Big Brother Randall told Little Brother Henry he would be graduating with his MBA, Henry gave him a big high five and asked if he could attend. Randall immediately said yes.

“I knew this was a moment that would be a giant seed in his mind, and if he could see the graduation, and I could give him a high five there, it would be a huge positive influence in his life,” Randall says. “Thanks to the amazing team at BBBS Columbia Northwest, we were able to get the approval and have Henry and his mother attend.”

They had planned to meet in the lobby outside the gym where the ceremony was taking place, but the size of the crowd made it difficult to find one another. Randall took his seat without seeing Henry, but, luckily, Randall’s family spotted Henry in the crowd. They tipped off Randall to his location, and when it came time for his row to stand up, he looked straight at Henry and pointed.

“Knowing I planted a seed of self-confidence and personal motivation in his heart and mind is all the reward I could ever ask for.”

“He smiled huge and his eyes lit up as he waved,” Randall says. “I admit, there were some ‘allergies’ in the gym.”

Long before tears fell (or did not fall) at a graduation, Randall was Henry’s age and growing up in far from ideal circumstances. As he describes it, he grew up in home with physical violence, mental abuse, drug abuse, poverty, and sadness. It would’ve been a tough situation for any child, and Randall gives credit to one thing helping him get through.

“Looking at where I am now, and what I went through as a child, I realize I would not be where I am if it wasn’t for the love and generosity of others,” Randall says. “Simply put, I had several key mentors early in life who helped me realize there is more in the world that just what was within the walls of my home.”

Mentors helped defend Randall’s potential and show him that there was more out there for him. He eventually realized that potential and joined the army, became a police officer, and eventually started a career in telecommunications at Comcast. His gratitude for his mentors became the driving force for him becoming a Big.

“I truly believe the time my mentors spent with me as a child and teen were the best gift I’ve ever received,” he says. “I volunteer to give back to the community that humbly gave to me as a child, hoping I can inspire just one other person to be a champion for themselves and to others.”

Randall’s relationship with Henry embodies that. Before he was matched, Henry struggled with math, but thanks to Randall’s help, he now feels like it’s one of his stronger subjects.

Also, having Henry attend his graduation accomplished exactly what Randall thought it would. After the ceremony, Henry came up to Randall with flowers and gave his Big Brother another big high five.

“This was a very special day for my Big Brother, and I am proud of him,” Henry says. “Because of him, I want to graduate high school, and I also want to go to college and graduate.”

Randall is looking forward to attending both of Henry’s graduations.