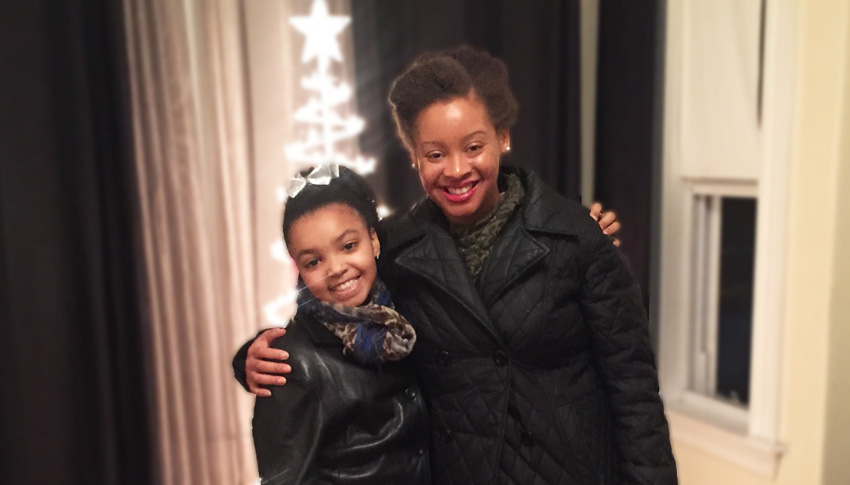 Big Sister Portsha grew up with a very busy single mother. Her mom didn’t really have time to craft or read, or to be silly with Portsha and try to touch the tip of her nose with her tongue, as Portsha liked doing. She was devoted to working and providing for Portsha and didn’t have a lot of spare time. Because of this, Portsha felt she was missing a mentor in her life, so she made mentors for herself out of pop culture icons.

“My mentors and role models were the powerful and brave girls and women I would read about in books, like Scout in To Kill a Mockingbird or see in movies, like Disney’s Mulan,” Portsha says. “And of course, Oprah. Everybody loves Oprah.”

By the time she was an adult herself, she knew she wanted to be a real-life mentor for someone. Signing up to be a Big Sister through Big Brothers Big Sisters of Massachusetts Bay was the perfect opportunity.

“I hope that every girl is as blessed as I am to have a Big like Portsha.”

In 2015, she was matched with Little Sister Arayah. At the time, Arayah was struggling with reading and lacking confidence. Portsha saw the potential in her Little Sister. She thought she could be someone who was great at reading and believed in herself, so she set out to help Portsha become that.

They started with trips to the library. They would pick out books, read them independently, and come together after to talk about what they learned. Portsha didn’t stop there. She also would ask Arayah to read things like street signs, menus, and directions during their outings. Over time, Arayah became more confident in her reading and in herself. She now loves reading—especially comic books.  Her mom has noticed the changes.

“Portsha has been such a motivating force in Arayah’s life,” she says. “She now exudes a confidence I have never imagined and is willing to take chances.”

In fourth grade, Arayah decided that she wanted to help other kids, so she started a club at her school called “Helping Hands.” Her goal was to offer students a place they could go and air out their frustrations. She had no idea if anyone else would be interested, but it turned out that, like her, a lot of students needed that kind of outlet.

Arayah gives credit to Portsha for supporting her and her ideas.

“If I didn’t have her as my mentor, there would definitely be a big void in my life,” Arayah says. “She encourages me to never give up on my hopes and dreams.”

Portsha always knew Arayah had the potential to be a great reader and someone brave enough to be a leader and help others. She hopes to continue to help Arayah reach of her potential, and to be the real-life mentor she missed out on when she was Arayah’s age.